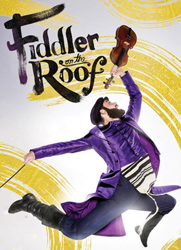 Broadway Across Canada
Fiddler on the Roof

Fiddler on the Roof first opened on Broadway in 1964 and has since seen several revivals. Its central theme of disenfranchisement and displacement is perhaps even more relevant today. Based loosely on the story “Tevye and his Daughters” by Sholem Aleichem, it’s set in what was known as the Pale of Settlement of Russia in roughly the early twentieth century.

This revival of Fiddler on the Roof opened its short run at Vancouver’s Queen Elizabeth Theatre with a stellar performance. Jonathon Hashmonay is the long suffering, yet steadfast Tevye, the de facto village leader on whom its people look to for wisdom and fortitude. He finds personal solace in kibitzing directly with God as if he was his best friend. He is desperately hanging on to his Jewish traditions, while the world outside his village seems to be leaving him behind.

It’s ironic that the show’s opening number is “Tradition” which Tevye sings with conviction, then spends the following three hours on stage being forced to abnegate many of those traditions. Tevye barely ekes out a living as the village milkman, but his necessitous situation doesn’t preclude him from daydreaming about being wealthy. Tevye articulates these ambitions in the show’s tour de force “If I Were a Rich Man.” Hashmonay delivers the song for the benefit of the audience and God; challenging just why he has to be so poor.

Tevye’s more stoical and rational wife Golde (Maite Uzal) is the glue that holds the family together. She patiently organizes the efforts of her husband and their five daughters. Her poignant, second act duet with her husband “Do You Love Me” is one of the show’s heart-warming moments.

Among the supporting cast, the three elder siblings: Randa Meierhenry, GraceAnn Kontak and Yardén Barr do more than just drive the story and sing like angels. As each one in turn falls in love with a man considered unsuitable by their parents, they collectively commit to a sisterhood that is inspiring and illuminating.

Jerry Bock and Sheldon Harnick’s original klezmer-inflected songs like “Miracle of Miracles” and “Sunrise, Sunset” can stand on their own. Hofesh Shecter’s recreated choreography is a quantum improvement on the original. If you enjoyed “Fiddler” the last time it toured or even any community offering, you will surely be astounded by this production.

Though the melancholy ending might be a downer for some, it certainly doesn’t detract from the show’s overall impact and enjoyment. Its theme stands as a testament to the human spirit.