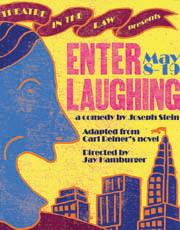 Set in New York City in the nineteen-thirties, Enter Laughing is a two-act comedy written by Joseph Stein, based on Carl Reiner’s semi-autobiographical novel. The odd title comes from a personal direction note, sometimes called a parenthetical, in the script from a play within the play. Carl Reiner, who was a producer, writer and actor on The Dick Van Dyke Show, is still alive at the age of ninety-seven. Despite a distinguished career, he is probably best known as the father of Rob Reiner.

Since first seen on Broadway in the early sixties, the play has had a number of incantations. It was the basis of the stage musical So Long, 174th Street, that closed almost before it opened. There is even a musical version of the same name that opened on Broadway in 2008.

Reiner puts himself in the story as protagonist David Kolowitz (Adam Olgui), a nice Jewish kid from the Bronx, whose ambition and exuberance for an acting career far exceeds his talent. He already has a job in a sewing machine repair shop and his parents have plans for him to attend college to pursue a career in pharmacy. Notwithstanding our hero’s lack of skill or experience, he manages to land a part in his first play – albeit for no pay. Young Kolowitz’s other problem – if it really is one – is that he seems unable to meet a woman he isn’t sexually attractive to – or them to him. The play becomes somewhat farcical when his leading lady, the producer’s daughter Angela (Lisa Robertson) wants to take their onstage chemistry into reality.

Adam Olgui turns in a fascinating madcap performance as the omnipresent David Kolowitz. I have to confess that I was skeptical as to whether he might run out of energy before the play ended. To his credit, he didn’t. Lisa Robertson is delightfully camp as Angela Marlowe and Noella Ansaldi is charmingly coquettish as Kolowitz’s dotting girlfriend. Ms. Ansaldi has the only earnest role and anchors the play’s second act. Together with Adam Olgui and Jennie McCahill she even manages a passable Bronx accent.

Among the supportive roles, Jacques Lalonde brings warmth and character to the role of Kolowitz’s altruistic employer. Jennie McCahill delivers an audacious Miss B, while Giuseppe Bevilacqua shows excellent comic timing as her stage beau Roger Feinstein. Janis Harper and Stanley Fraser create some poignant moments as the protagonist’s watchful, though well-intentioned parents.

Director Jay Hamburger maintains a lively pace throughout, without allowing the play to become uncontrollably slapstick. However, the first act may have benefitted by being ten minutes shorter. Philip Roaf’s set design is essentially a black box with partitions, painted in a mix of styles strung along the back of the stage.

The enthusiastic cast have obviously put a lot of their heart and soul into this piece of theatre. Theatre in the Raw provides a production that is both uplifting and entertaining.