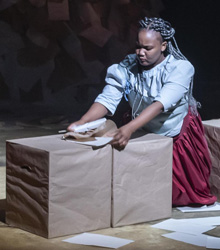 Emilia Lanier (née Emilia Bassano) is an enigma; a published English poet born in Bishopsgate, London mid-sixteenth century of an Italian father and an English mother. It’s thought by some literature scholars that she is the subject of William Shakespeare's Dark Lady Sonnets. Playwright Lloyd Malcolm provides a highly speculative, if largely entertaining, exploration of Emilia’s 76-year life. The playwright certainly attempts to fill in a few self-created blank spaces in the extraordinary poet’s life and yes, she plainly revamps history to suit her own narrative. It’s certainly easy to surmise that Emilia was one of Shakespeare’s many muses, but in Lloyd Malcolm’s account, the Bard would seem to have plagiarized our heroine.

There is certainly much to enjoy in this piece of theatre, though I confess I saw little benefit of having four (five if you want to count Piril Sesli’s brief play-within-a-play portrayal of Iago's wife Emilia), beyond gainful employment for the additional three actors. That is not to say that all four actors didn’t turn in stellar performances in the various facets of the protagonist’s life. I was especially impressed with Kiomi Pyke’s lively performance as the younger Emilia.

My only real gripe is that, even though a majority of the play’s dialogue is delivered in contemporary language, every so often we get some Shakespeare jargon thrown in that tends to water down the humour and distracts from the play’s intended backlash towards patriarchy.

While the eponymous character is central to the story, this is a true ensemble piece and therefore hard to single out individual performances. Perhaps the exceptions are Charmaine Sibande who arguably has the most to do as the third Emilia exhibiting controlled rage and Dana Schindel is hilarious as Susan Bertie, Emilia’s early mentor.

Lois Anderson and her stage management team do an excellent job of keeping seventeen performers coordinated while maintaining an even pace. Cecilia Vadala’s economic set has to be pulled out to maximum to accommodate many actors (sometimes the entire cast) on stage simultaneously. Vadala’s clothing is period accurate for both the nobility and the peasantry.

Emilia is a lot of fun - and thumbs its nose at Tudor England. The pro-feminist proclivity – I sense - is mostly tongue-in-cheek.