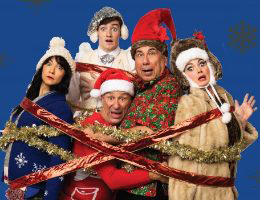 The Elbow Room Café was a bona fide institution in Vancouver. Situated on Davie Street opposite Emery Barnes Park, almost everyone who lives in Vancouver, has, at some time visited the Elbow Room Café. The few who haven’t eaten there, at least would have heard of it (and perhaps tried to avoid it). Partners in business and in life Patrice Savoie and Bryan Searle ran this iconic eatery for more than three decades. The café created its legend by serving bacon and eggs with huge dollops of good-natured abuse. It was a place where the customer is never right – at least not until it’s time to pony up a big tip or offer a donation to A Loving Spoonful, the establishment’s favourite charity.

Holiday at the Elbow Room Café is not a direct sequel to Elbow Room Cafe: The Musical, but rather a seasonal special with the infamous restaurant as a backdrop. David Adams returns as the cynical curmudgeon Bryan, while Joey Lesperance takes over the role of Patrice, who is every bit as simultaneously ornery and altruistic as his predecessor to Allan Zinyk. Adams is perfect as the straight man (in the sense of being a comedic duo) to Lesperance’s outrageous shtick. The two have terrific onstage chemistry and seem to share mutual professional respect.

Emma Slipp once again plays the flamboyant Tabby – this time minus husband Tim. She opens the show standing outside the Elbow Room making a return visit to Vancouver from Tennessee on Christmas Eve. Seeking comfort inside, she finds Patrice busily closing the café early with the threat of a looming snow storm. Patrice, like other Vancouver denizens knows it takes only a minor snowfall to turn Vancouver into an Arctic wilderness. Anxious to attend a festive event, the last thing he wants is last minute customers. Fortunately for the audience, Patrice never makes it to his function, but Tabby, Bryan, Holly and a wacky delivery driver bring the party to the Elbow Room Café.

The show is much less structured than the original, with well developed writing giving way to a loosely scripted dialogue. The pacing is uneven (which may or may not be deliberate) with the setting arbitrarily switching between the Elbow Room Café and the Historic Theatre as a show within a show.

Holiday at the Elbow Room Café is not perfect. The raucous comedy can be overwhelming and the jokes are a little obvious, but like the original, the show has a big heart.

Bryan Searle passed away almost exactly two years ago at the age of 87 at St Paul's hospital after a long illness. He is sadly missed by friends and former customers.