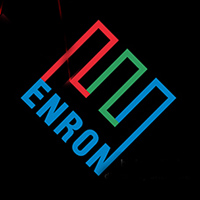 A consummate cast of lead actors supported by a substantial and thoroughly competent ensemble make ENRON, currently running at Jericho Arts Centre, a continuously fascinating event. On the face of it, charting the business history of giant energy firm Enron from Texan gas and oil company to global marketing superpower might not be a stimulating artistic topic, especially since its subsequent fall from grace is still well known. Playwright Lucy Prebble throws in song-and-dance, ventriloquism, pop music (Patrick Boudreau) and video to add theatricality to what is a very talky play. Nicola Spinolas precise choreography and projections by Harika Xus and Vanka Salim give good value.

Jugglers, balancing acts, tight-rope walkers and in particular illusionists are on stage in their own persons. Jeffrey Stilling (Michael Berdan), Kenneth Lay (Linden Banks), and Andy Fastow (Kurtis Maguire) were all real people. In Prebbles portrayal, the avuncular Lay, a founder of the firm, encourages the clever young men (they were mostly men) with smart, sometimes visionary, ideas who could turn a fast buck while being carefully unaware of where they might cross a line. Behind the scenes, he also lobbied governors, presidents and presidential hopefuls to legislate in his favour. And he was utterly ruthless.

Stilling and Fastow are men in love with their own cleverness. Fastows satisfaction at solving company problems by developing neat algorithms leads him to devise more and more solutions without ever considering the real nature of the problems themselves - unpayable debts. He can make them invisible but cannot make them vanish forever. In his fantasy world, these debts come alive as Raptors. Kurtis Maguires affection for these puppet monsters is bizarrely charming as is his geeky portrayal generally. His adulation of Skilling is as much a driver of his behaviour as his ambition, both of which are so clearly laid out that his ultimate betrayal of Skilling comes as a complete surprise.

Michael Berdans confident depiction of Jeffrey Skilling was entirely convincing from beginning to end, tracking him from the socially unsophisticated salesman who wants everyone to understand (I have slides) to the globally admired, deceitful purveyor of greed he became. Under his aegis Enron changed from an energy supplier to a trading firm. It developed ideas that are now commonplace such as mark-to-marketing sales methods, transformed the energy sector and was seen to be investing in innovative high-profile ventures. Some of these ideas failed because he refused to admit the existence of real-life problems and to work on real-life solutions. Inside the bubble of his corporate vision, all solutions could be found. Berdan delivered a picture of a man driven by ambition and completely focused on his own vision, even in his fall.

The character of Claudia Roe (Lara Abadir) the only major female role, is a composite of various women who worked at Enron. Rivalling Stilling and Fastow in ambition she promotes less pie-in-the-sky projects and more practical solutions to problems. Abadir lives up to Claudias billing by Vogue as the 14th most influential woman in the world, cool, competent and cutting.

All in the ensemble acquit themselves well in the many cameo parts in the play, from one half of the Lehman Brothers to a bankrupt employee, from honest journalist to wilfully-blind accountant.

A white minimalist set by Josie Lee enhanced with projections, a table, chairs and boxes and unobtrusive lighting by Michael Merthot made a creative space for the Enron world, but made the many scene changes too long. Nevertheless, under Brian Parkinsons direction the play was completely engrossing.