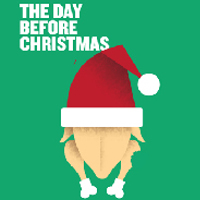 The Day Before Christmas by Stacey Kaser and Alison Kelly

If Charles Dickens taught us anything it’s that not everybody gets Christmas. In Stacy Kaser and Alison Kelly’s seasonal play The Day Before Christmas, professional caterer Alex gets Christmas a little too much for her own good.

Devotedly known by her clients as the “Christmas Lady” and an excruciatingly perfectionist by her family, Alex (Jennifer Copping) just isn’t capable of saying ”No” then complains about her workload. It doesn’t help that her pragmatic husband Alan (Paul Herbert) is totally clueless – especially when it comes to his idea of a perfect gift.

Despite the play’s slightly deceptive title, Alex’s story starts almost immediately after (Canadian) Thanksgiving, even though Drew Facey’s chaotic set depicts the scene at the end. Alex arbitrarily decides that this year’s extravagant party theme is to be Russian Faerie Tales. She then makes an ill-considered promise to bake a wedding cake for her daughter Brodie’s (Julie Leung) friend for initially 100 guests – although, the number rises incrementally throughout the play to 250 guests.

Alex’s second mistake is agreeing to cater a Christmas banquet for a former high school sweetheart who has since become famous. When her two teenage offspring are committed to their own agendas and her husband and ego-centric brother unwittingly sabotage her Christmas project, the normally efficient and expeditious mum begins to unravel.

The Day Before Christmas boasts a solid six member cast. Although, Jay Hindle as Alex’s bother Keith never actually appears on stage, but “Skypes” his performance from a remote location and Curtis Tweedie as Brodie’s date Dirk only makes a couple of brief second act appearances.

Daren Dyhengco as Alex’s son Max and Julie Leung who are veterans from the previous Arts Club mounting of the show, acquit themselves superbly. Paul Herbert, who typically takes on more serious roles, didn’t always look comfortable coping with the slapstick comedy demanded by this production. Jennifer Copping is dominant in the central role of Alex and the play’s occasional narrator. She embraces her character’s complicated personality, struggling to seek order in chaos.

Director Chelsea Haberlin manages to maintain an even pace even when the action gets a little over-the-top and somehow doesn’t allow the one-sided telephone conversations to become confusing. Drew Facey’s fully furnished set of the family home is nicely detailed, but the scene-shifting aspect was lacking. I found Matthew MacDonald-Bain’s sound to be noticeably intrusive at times.

The Day Before Christmas is a lot of fun to watch, but like the play’s main protagonist, is guilty of excess.