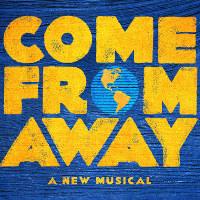 Broadway Across Canada
Come From Away by Irene Sankoff & David Hein

Twenty years ago, when terrorist-guided planes destroyed the World Trade Centre and spurred hate crimes, prejudice and wars, they also produced a flowering of neighbourly help and goodwill, not just in cosmopolitan New York, but around the world, and specifically in the small, far-off town of Gander on the island of Newfoundland, "the Rock". The US had rapidly closed American air space and all planes past the Atlantic half-way point and approaching the United States had to find landing room elsewhere. Gander Airport took 38 wide-bodied aircraft carrying 6,600 passengers, almost outnumbering the citizens of the town of Gander. How that small, contained population accommodated the host of passengers from across the world - from Africa and France, England and Germany, the US and India and more - is the story told by Come from Away.

The show opens on an ordinary morning in Gander. Claude (Kevin Carolan), proud mayor of Gander, chats to various locals as he takes his morning Tim Horton's with the spokesman for the striking bus-drivers (Jeremy Woodard). Then comes the terrible news and then the challenges. How to feed so many? where to house them? and then the realization that there are complications: Babies' needs, children's needs, health needs, religious and dietary issues. There are pets in the hold; passengers' suitcases are sequestered and everyone needs clean clothes. The town rolls up its collective sleeves and improvises, even to the point of turning the hockey rink into the largest cold storage in the country.

The mood of the passengers at first is one of fear and uncertainty. Suspicion on both sides gradually gives way to acceptance, and even lasting friendships. The robust – for some passengers too robust (kissing the cod is not for everyone) – Newfoundland culture is celebrated in accent and music. New relationships form and others wobble under the stresses of confinement. It is one of the strengths of this show that quick vignettes and one-liners blend smoothly with longer scenes, and characters seen only momentarily have as strong a story to tell as those with a fuller plot line. The result is a multi-textured patchwork of individual stories against a solid background of common humanity.

Twelve actors play 16 named characters, representing real individuals such as Hannah (Danielle K. Thomas), Captain Beverly Bass (Marika Aubrey) and Claude . Some like Beulah (Julie Johnson) are composites of two or more real people and as well there is a multitude of other townsfolk and passengers who appear for a moment and may or may not be seen again. Each one is carefully and clearly delineated.

The cast are without exception skilful and accomplished players. As examples, in mid-stride local girl Annette (Marike Aubrey) can slip on authority and a Texan accent with a Captain’s jacket for a nuanced portrait of Captain Beverly Bass. Nick Duckart swaps between insecure gay American (Kevin J.) and master chef Ali with ease. The rest of the cast is equally versatile.

The minimalist set of chairs and tables by Beowulf Boritt is complemented by Howell Binkley’s subtly complex lighting design. Clever, quick-change costumes by Toni-Leslie James speak Newfoundlandese as strongly as the cast. The tireless band rocks.