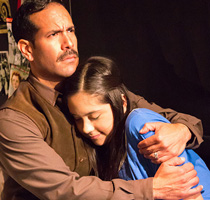 The Point Blank Productions new adaptation of The Diary of Anne Frank comes to the Norman & Annette Rothstein Theatre by way of this year’s Chutzpah! Festival. By now, everyone knows the story of Anne Frank, the Jewish teenager who hid away with her family for two years, while Nazi’s hunted down Jewish citizens of Nazi-occupied Netherlands during World War II. But what is different about The Diary of Anne Frank LatinX?

First of all, what does the term LatinX really mean? It actually relates to people of Latin American origin or descent, though not necessarily Spanish speaking, but as a gender-neutral or non-binary alternative to Latino or Latina. All the actors performing in this production are Latin American. So why did director/co-producer Stan Zimmerman give such a well known story a modern-day ethnic twist?

It turns out that when he heard of the dozens of safe houses around Los Angeles hiding LatinX families from the department of Immigration and Customs Enforcement (ICE), he drew parallels to Anne’s story. Sure, the situation is certainly unsure for these people, waiting for a more sympathetic government in the US, but when caught they are deported not murdered. Unlike the Jews hiding from the Nazis, undocumented migrants are to some extent able to leave their homes daily to work (albeit illegally).

However, Zimmerman’s inspiration makes for a distinctly fascinating reading of Anne Frank’s words about love, fear, and hope. Zimmerman and his talented cast do a commendable job of maintaining the stretched tension throughout the play. Even knowing the eventual tragic outcome, we find ourselves hoping for a better one this time.

I should say that the play’s setting does NOT get relocated from Amsterdam to LA, and the essential storyline is faithful to the original. However, it begins in somewhat surprising fashion. Alana Loayza and Rebecca Asquino (who appear intermittently through the play as Mr. Khaler and Miep Gies) are perched side by side on stools at centre stage reading the foreword text from a book. The four members of the Frank family and the three members of the Van Daan family are all dressed uniformly somber grey with the families seated on the floor on opposite sides of the stage.

Happily, this theatrical device soon gives way to conventional theatre with actors assuming their roles. In the second act, the grey garb worn by the residents of the secret annex give way to more colourful individual clothing in the second act.

While this is essentially an ensemble theatre piece, there were standout performances by Genesis Ochoa as Anne and EmilianoTorres as heroic patriarch Otto Frank who anchors the show with his strong stage presence. Ms. Ochoa takes her character from a high-spirited optimist to a self-possessed young woman in the space of two hours. However, there are times when her hurried dialogue and light voice doesn’t easily carry to the audience. Tasha Dixon, a former Miss Arizona, displays the strength and passion of a mother whose daughters are struggling with the soul-destroying confinement.

Despite the story’s horrific ending, there are happier postscripts. Otto Frank was eventually liberated from Auschwitz by the Allied Forces. He was the only survivor of the residents of the secret annex. He remarried another holocaust survivor and lived in Basle, Switzerland until 1980. Living long enough to realize is daughter’s spirit would become immortalized. Frau Miep Gies, Anne’s protector and the story’s last survivor, died aged one hundred in 2010. It was her who found Anne’s diaries and handed them over to Otto Frank.