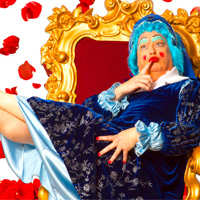 To gear up towards the holiday season, the Improv Centre is featuring Christmas Queen 3, a festive Improv play which is the third edition in its series. While each performance is personalized based on the audience’s involvement in an Improv setting, the backbone of the plot lends itself to witty one-liners, clever puns and a healthy dose of slap stick humour!

The Christmas Queen is the star of her own match-making reality TV show, played to the tune of The Bachelorette, where she is in search of finding her true love by December 25. The eligible suitors are cleverly holiday-themed, including the likes of Jack Frost, The Grinch, Elf on a Shelf and of course, good ole Saint Nick! The enthusiastic TV host, Bob Matchit, facilitates the performance by keeping the audience involved throughout to customize the plot.

The actors did a great job at staying on the ball with witty and clever responses that were often free-styled given the audience’s direction. For example, Jack Frost made the pun that he would melt in the hot tub when the audience chose that as the scene’s setting. In addition, the wide accents that were used to portray the different characters were believable and added to the humour.

The set design was merry and the costumes were vibrant which complemented the colourful tonality of the play nicely. I was impressed at how they improvised on the spot to create props based on the audience’s direction, such as one actor suddenly pretending to be a fly.

The audience was nicely engaged throughout the performance, not just through guiding the plot. One member of the audience was selected to improvise on the actual stage which is always interesting to see how they will respond since they aren’t trained professionals. Lastly, Christmas wish-list ballots were filled out during the intermission by the audience and the responses were improvised by the actors in the second half of the show.
As December has started, I needed an event to kick start my holiday spirit and this performance did the trick! It was playful, entertaining and I literally caught myself laughing out loud.

I think it’s safe to say that Improv is zany, fun and shouldn’t be taken with too much seriousness. If you are looking for that deep and rich experience, this won’t be the play for you. If you want to be a part of the holiday cheer, head on down to Granville Island and check this out!