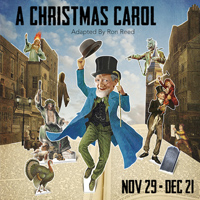 We can never seem to escape Christmas without being served yet another stage adaptation. Though for originality, you couldn’t go far past Pacific Theatre’s 2015 radio broadcast style reading.

This adaptation by Ron Reed offers a nuanced solo performance by Reed himself in story theatre mode, delivered in a mid-nineteenth century interlocution. He doesn’t even play Scrooge as an individual role, but as the narrator, who, by his dress and demeanour might have lived at a time of the story’s setting. Through Reed’s performance, we witness Scrooge’s redemption and thus, the recuperation of his soul, as he is eventually swayed to change his ways through his re-connection to humanity.

Reed’s rugged delivery deftly defines the main characters. Nonetheless, the show does require thoughtful attention. So it may not be entirely suitable for a very young audience.