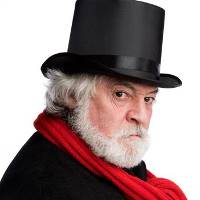 Russell Roberts joins a clutch of other notable actors who get to utter “Bah, humbug!” Roberts does much to downplay the all too familiar characterization of Scrooge as the despicable moneygrubber, but rather portrays him as a misunderstood curmudgeon. So then, his eventual conversion to community benefactor seems more organic, and his oft repeated utterances of “Bah, humbug” appear to be for purely comic effect.

Director Rachel Peake walks a fine line between bringing something new and original and remaining essentially faithful to a well-known story. Peake’s skillful direction succeeds partly because of the audience’s familiarity with the story, though her signature on the production’s overall quality is unmistakable.

While Peake doesn’t compel the actors to conform to mid-nineteenth century interlocution, Carmen Allatore’s well-tailored clothing is definitely evocative of a Dickensian time of Victorian London.

Drew Facey’s imaginative symmetrical cathedral style set is comprised of equal and opposite open side panels that swivel about a central pivot point, and a circular raised platform in the form of a clock. The stage offers an expansive open space allowing actors a generous range of movement.

Russell Roberts delivers a nuanced performance of the cantankerous miser: wonderfully gruff in the earlier scenes, appropriately mystified when haunted by the spirits and wantonly orgiastic as the atoned altruist.

Allan Morgan is fittingly outrageous in agile performances of a vagarious Jacob Marley, a gregarious Spirit of Christmas Present and an infectious Mr. Fezziwig. He also contributes the show’s whimsical prologue and epilogue.

The portrayals of the maidenly Ghost of Christmas Past (Emily Jane King) and the Ghost of Christmas Yet To Come (Josh Chambers) who resembles a portent Grim Reaper were fairly predictable, yet nonetheless fun to watch. Jenna Lamb brought youthful charisma to the role of a young Ebenezer and a wholesome reading of Tiny Tim that dispelled the character’s etiolated convention.

On the debit side, some of cast in supporting roles had difficulty in projecting their lines in an auditorium normally credited with excellent acoustics. But if you happen to like Christmas fare in a live theatre setting, this excellent production of A Christmas Carol is a show for the whole family.