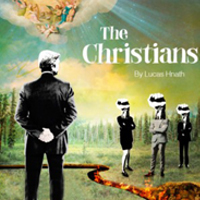 If it was your first time coming to the Pacific Theatre on West 12th Avenue, you might be forgiven for thinking that you had entered the basement chapel of Holy Trinity Anglican Church. Stancil Campbell’s detailed set of a typical suburban church becomes a church within a church for Lucas Hnath’s single act theological drama, The Christians.

This cogent representation of a contemporary church has illuminated cruciforms on each wall, two standard pews on the west side and a double rank platform that accommodates a 14-member choir on the east side. It’s the choir that gets the ‘service’ under way with a medley of rousing ‘Christian soldier’ songs.

Hnath’s play, while not totally devoid of humour, is a serious and complex study of a crisis of faith; not just for one person but an entire ecclesiastical family. The playwright offers a counterintuitive perspective of the concept of Hell and Purgatory and whether either exists at all.

The theological argument is presented by way of a sermon imparted by Pastor Paul (Ron Reed) on the tenth anniversary of his church’s consecration. The Pastor’s controversial remarks touch on the spiritual fabric of Christianity. Apparently, Pastor Paul had spoken to God, and God had spoken back to him. Paul’s predication repudiates the ‘sacred canon’ that there is no such place as Hell and no one is ever going to wind up there – regardless. Associate Pastor Joshua (Tre Cotten) finds he is unable to accept his superior’s direction and leaves the church taking of some of the fundamentalist congregation with him.

Ron Reed as the pastor in the eye of the storm delivers a nuanced performance. If he were to get tired of his current day job, he could comfortably handle a role in the church upstairs. However, when Reed is called upon to (abruptly) step outside of character and serve as de facto narrator, it all seems unnatural.

Allan Morgan’s immense talent was under-used as a church elder. Tre Cotton is certainly convincing as the charismatic Pastor Joshua. Erin Ormond as Elizabeth has little to do for the first hour except to look stunning in the front pew, but when called upon, she offers a carefully measured performance of the pastor’s wife torn between personal conviction and devotion to her husband.

Director Sarah Rodgers keeps the play moving at an even pace, allowing the actors to build the tension. But I’m not sure about the over-use of chorded hand-held microphones. It did make sense during church service scenes, but definitely not during the private and frank discussion between Elizabeth and Paul, where it looked like she was being interviewed.

Hnath is noncommittal about which side he would take, preferring to present an even handed approach, and thus allow audiences to draw their own conclusions. I found the premise interesting, the performances engaging and the choir entertaining, but I didn’t leave with a sense of soteriological clarity.