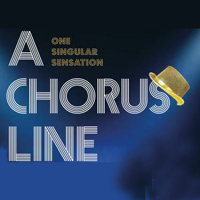 This Fighting Chance Production of A Chorus Line is a cogent, single act, evenly paced piece of musical theatre. Its original premise still stands up well against later models of Broadway fare. The show uses the fascinating double paradox of success in failure and the synergy derived from teamwork as a better option than when selfishly working towards an individual goal.

In a creative start, twenty seasoned dancers casually take to a bare stage in front of a mirrored wall. Under the watchful eye of dance director Zach (Christopher King) and dance captain Larry (Marcel Tremel), auditioning artists of all shapes, sizes and sexual persuasions, dressed in rehearsal clothes as varied and colourful as the performers themselves, go through their personal rituals in anticipation of the arduous task ahead.

Tensions we all endure when unemployed and looking for our next paying gig are magnified in the hopes and fears of auditioning performers. Emotions are displayed with varying degrees of conspicuity. Sheila (Alishia Suitor), the blonde, statuesque beauty has attitude and confidence to spare. Val (Lindsay Marshall) is obsessed with her own looks and even turns in a delightful tongue-in-cheek performance of “Dance: Ten; Looks: Three” (popularly known as the Tits ‘n Ass song). Mike (Gregory Liow) hides his nervousness in his fiercely athletic dance style and Paul, a gay Puerto Rican (Jess Alvarez) is still hung up about his former burlesque career.

At the top of the show, “I Hope I Get It” sung by the entire company, illustrates more than anything the common mindset of the dancers to make the cut to the last eight (four men, four women). Each dancer is aware that their selection in an established show could be a career turning point.

As Zach and Larry put the ambitious dancers through their paces, most are really good, some are mediocre and some hardly know their left foot from their right in the elaborate choreography. The first cut whittles down the auditioners to a manageable number as they then step forward in line, holding their eight-by-ten inch, black and white head shots in front of them. This group become the core performers throughout the show as they display not only their talent, but undergo a rigorous analysis as they expose their lives in soul-bearing soliloquies to the director unseen at the back of the theatre.

A Chorus Line is perhaps the definitive ensemble theatre piece with every performer accepting equal responsibility for the show’s success. Though perhaps predictably, female performers are more conspicuous than their male counterparts. If there is one performer who separates herself from the group, it would be Vanessa Quarinto as dancer Diana Morales who leads the company in one of the show-stopping songs “What I Did For Love.” Lucia Forward, who has arguably more acting to do than any of her fellow cast members is beautifully neurotic as Cassie. She shares some background baggage with Zach that both of them have to get past. When she totally nails her solo effort, “The Music and the Mirror” it makes it even more difficult for Zach to put her in the chorus line.

The dancing and singing in this production are ably supported by unseen musicians led by Arielle Ballance who play throughout the two hours of this nonstop performance.

A Chorus Line is ultimately a story of survival; undoubtedly expounding that rejection is all part of life.
Sometimes dreams come true, sometimes they don’t. Dedication to one’s art doesn’t always insure success.

After four decades, this old girl is starting to show its age spots. Nonetheless, it’s still up to providing worthwhile entertainment.