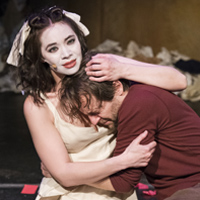 Leonard Cohen died on November 7, 2016 in Los Angeles at age 82. Chelsea Hotel opened in Vancouver in January, 2012. It’s not known whether Cohen ever saw a single performance, but if he did, he likely would have done so surreptitiously.

Right off the bat, I confess to being a Leonard Cohen fan. There are few of his songs that I can’t identify with. When we associate the Chelsea Hotel with Cohen we naturally think of the red brick building on West 23rd Street in Manhattan. It’s the place where Cohen resided for a while in the late sixties, when the hotel was far more famous than he was. Lyrics to “Chelsea Hotel #2” - I remember you well in the Chelsea Hotel, you were famous, your heart was a legend – where apparently an homage to Janis Joplin, with whom he struck a casual liaison with while both were staying there.

Tracey Powers’ brilliantly surreal revue borrows a little from Kurt Weill‘s theatrical style. It takes place entirely in a hotel room likely not a whole lot different to the Montreal Bard’s temporary digs in New York. Marshall McMahen’s effectively ascetic set, with piles of crumpled pieces of paper in every corner and a (rather symbolic) paper wall, is evocative of Cohen’s early struggle with mental block. Steve Charles, who also performs in the show, devised musical arrangements for the six (three women and three men) voices as well as for the seventeen instruments that get rotated around the players.

“The Guests” (the song that begins with; one by one, the guests arrive) seemed like a totally appropriate Cohen composition to start the show with. These “guests” are surreal characters - figments of the writer’s imagination - that pervade a lonely writer’s (Adrian Glynn McMorran) hotel room and pre-enact the songs to inspire their creation.

It was a diversified and talented cast that delivered, with a theatrical flair the music of Leonard Cohen. While it was Krystle Dos Santos who got the nod to cover many of my personal favourites: “First We Take Manhatten,” “I’m Your Man,” it was Marlene Ginader’s stage presence that was impossible to ignore.

One doesn’t have to be a huge fan of Cohen’s densely lyrical songs to enjoy this show – it may not even help if you are. Leonard Cohen’s best (and least) known songs are reworked, revitalized and rearranged to accommodate a theatre-going audience.