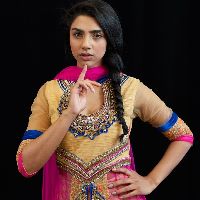 Bombay Black written by Anosh Irani exposes the underside of life for women in India. Set in Bombay the story unfolds through the interaction of three characters, Padma, the mother, played by Nimet Kanji, Apsara, the daughter, played by Arshdeep Purba and Kamal, a blind man, played by Munish Sharma. Irani uses these three characters to tell a story that began ten years ago and in doing so unveils centuries of cultural bondage for Indian women.

Playing to a full house at the Firehall Arts Centre, the play unfolds in two acts. Apsara and her mother, Padma, live together and support themselves with the dances that Apsara performs for wealthy men in their apartment. There is an undercurrent of distrust for men that is evident in the dialogue between the two women. Distrust acts as a foundational element of the play on which to explore the injustices women injure in Indian society.

The scenes are clothed in darkness for portions of the play and at other times the lighting is dim. Chengyan Boon, the lighting designer, has used this technique as an analogy for the shadows that women in Indian society live in. Cloaking scenes in semi-darkness adds to the undercurrent of distrust that is woven throughout the play and alludes to the secrets that the mother and daughter have kept from each other.

Munish Sharma plays Kamal, a blind man who has come to the apartment of Padma and Apsara ostensibly for a dance but it becomes apparent that his connection to the family is deeply significant to the ten year story and explains why Padma and Apsara left their village. Kamal’s blindness is symbolic. It could allude to the blindness that Indian society has toward the plight of Indian women of a certain class. It could allude to the ignorance of cultural superstitions that permeate Indian life.

Bombay Black is a play that pulls at the emotions. It deals in betrayal and unmasks the ugly side of love lost. In the end it also unveils hope.