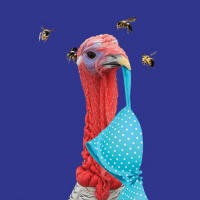 The Birds & the Bees, aside from being a simple metaphor for teaching young people about sex before they discover it for themselves in the schoolyard, is a whimsical comedy by Mark Crawford. The play’s characters are an omnifarious foursome consisting of: a turkey breeder, a beekeeper, a tenant farmer and an entomology student.

Despite what one might glean from the play’s title, only Earl (Tom McBeath), the tenant farmer is actually getting any (sex, of course), though, predictably that changes before the start of the second act. The First act is essentially a romp with some physical shenanigans taking place between Sarah (Dawn Petten) who has recently walked out on her husband and Ben (Christopher Allen) a student assigned by a university to help Gail (Susinn McFarlen) with her bee colony collapse disorder.

The second act takes a more reflective turn, with Ben and Sarah having to face the consequences of a single moment of fervor, and Earl and Gail taking stock of their more complex relationship. Gail is Earl’s landlord and neighbor, and the pair has endured a kind of unpropitious friendship since their respective spouses ran off together. Unlike Gail, Earl has moved on and put himself out there since the split. He prefers what he calls a “No strings attached” dalliance with his female companions. Earl’s lifestyle choice doesn’t sit well with the rather more uptight Gail.

The talented cast manages to expand their characters limitations enough so that they come across as authentic. Dawn Petten anchors the central character with smarts and sympathy. Susinn McFarlen is stellar as the enigmatic Gail. Christopher Allen is just a little over-the-top in the first act as the naive Ben, but his performance is certainly more measured in the second act. Tom McBeath delivers a nuanced performance as indefatigable Earl.

Director Lauren Taylor keeps the production zipping along at a smart click, especially in the more dramatic second act. Ted Roberts’ crammed set splits the stage into two frames with a central unseen stairway from the first floor dividing Gail’s second floor bedroom stage right and Sarah’s on stage left. The audience just has to imagine that there is a wall between the two.

What Crawford’s play lacks in subtlety, it at least partly makes up for in easy-to-enjoy fun. There are few surprises, but lots of laughs.