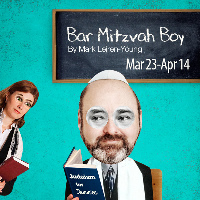 Preparing for a bar mitzvah (trans. son of commandment) may easily take twelve month or even longer, but Joseph Brant (Richard Newman) wants his immediately or least before his grandson has his and he is willing to offer a generous donation to the Synagogue to get his way. But Joey’s bar mitzvah will not be a smooth passage into manhood.

Joseph Brant, or Joey, as seems to be his preference, is a successful divorce lawyer who somehow missed out on his own scheduled Bar Mitzvah some fifty years earlier. When he meets Rabbi Michael (Gina Chiarelli), a third generation Rabbi who looks less like a Rabbi than he does, they don’t get off to the most amicable of starts to their relationship.

Rabbi Michael is a progressive church leader whose own daughter is preparing for her bat mitzvah. Joey has let his Judaism faith lapse over his adult life, while his daughter has become a Jewish fundamentalist.
When Rabbi Michael reluctantly agrees to help Joey rediscover his religious conviction and finally fulfil his sacred rite of passage, their beliefs and life perspectives seem polar opposite, but as their deep-seated personal issues are unearthed, they learn that their vocational missions have many similarities after all.

Richard Newman and Gina Chiarelli are absolutely on the mark as two disparate people, who despite overwhelming odds, see their undertaking come to a successful conclusion. Director Ian Farthing measures the level priming that maintains audience attention without sacrificing relevant details and allows the actors to drive the pace.

Carolyn Rapanos’ economic set of Rabbi Michael’s office, that ultimately becomes Joey’s office and the Synagogue podium over a painted linoleum that covers the stage floor and an entire wall, allows sufficient movement for the actors. Kaitlin Williams, who is usually seen on stage, brings her flair to the production’s clothing. The use of symbolic items such as the tefillin and the tallit helped make gentiles (like me) in the audience feel like part of the mishpocheh.

Once again, Pacific Theatre provides a production that is thought-provoking, uplifting and entertaining. Mazel Tov!