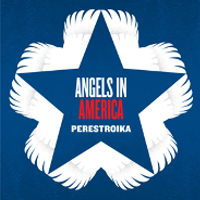 Perestroika, a word whose literal meaning I admittedly needed to google, means ‘restructuring,’ and refers to a political movement in the Soviet Union during the 1980s that probably resulted in the end of the USSR, the end of the cold war, and the fall of the Berlin Wall. So, what does this mean for Tony Kushner’s Part Two of Angels In America, to a post-Millennium audience? Quite a lot, perhaps. In a world that still feels very topsy turvy, we have new plagues now. With a red hot political climate and widespread racial issues threatening to end humanity (if global warming doesn’t do it first), it’s easy to see how the concept of ‘restructuring’ seems both relevant and useful.

Angels In America: Part Two begins where we left off in Part One, in Prior Walter’s bedroom after he’s been visited upon by an angel. We move through to a resounding monologue by the World’s Oldest Living Bolshevik (played by the amazingly talented Gabrielle Rose). From here, scenes move quickly and seamlessly one into the next. In Act One, each actor truly becomes one with each character they play without exception, and all effortlessly deliver their lines almost as though they were spellbound to do so.

Notably, Craig Erickson has a lot on his plate in this Act. Erickson plays a dummy version of Joe Pitt with pretty cool robotic movements, as well as a very intense nude scene requiring an incredible amount of bravery and vulnerability. It’s no surprise Erickson seems like he’s starting to run out of momentum by the end of Act Three, as do a few other members of the cast. After all, this play is a marathon, and the actors whose stamina is dwindling by the 3hr50min mark should honestly be proud that they made it to the finish line in one piece. And it only further illuminates how extremely difficult this play is to perform. For such a lengthy play, Kushner’s masterpiece also boasts some pretty weighty dialogue, abstract themes, and densely-constructed ideas.

The actors that never showed signs of slowing throughout deserve just a ton of accolades. Celine Stubel, who plays the part of Harper Pitt, shone in her role as though she were born to play it. Stubel’s portrayal is wistful and emotionally exposed, with a depth that should make you thoroughly relate to Harper’s painful loneliness. Gabrielle Rose also consistently wowed from start until finish, and was incredible in her depiction of the angry yet incredibly compassionate Mother Pitt, whose moral tumult reveals her to be an incredibly loving mother and human. Rose also plays Ethel Rosenberg (or, Roy Cohn’s guilty conscience in ghost form). A poignant scene has her singing softly to a dying Cohn (Brian Markinson), and in another scene skillfully reciting the Kaddish, a jewish prayer of mourning along with Louis (played by Ryan Biel). I don’t have a hard time believing it took a long time to learn the lines for this scene, and both Biel and Rose are completely in sync and do not miss a beat.

Other elements of this production deserve recognition as well – from the creative team (I don’t know who made it rain on stage but it was pretty amazing) to Director Kim Collier who clearly had a cohesive vision that carried nicely from Part One to Part Two. The costumes were thoughtfully put together and the set design was impeccable, with more complex tricks (angels flying and rafters falling from the sky) all going off without a hitch.

Ultimately, Tony Kushner’s Angels In America is a love-hate story of America. While some characters speak its praises, other characters are dubious (Belize, played by Stephen Jackman-Torkoff, says at one point about the national anthem, “He set the word ‘free’ to a note so high nobody can reach it…. You come to room 1013 over at the hospital… I’ll show you America. Terminal, crazy, and mean.”) But the promise of change, of painful progress, and of choosing life in spite of its terribleness (and, failing this, an afterlife of ‘racial impurity and gender confusion’ reminiscent of the city of San Francisco), gives this story a complicated message of hope that we can hold with us, as the world continues forward through its ongoing state of disorder and upheaval.