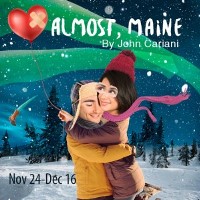 Almost, Maine is a quirky romantic comedy that offers up nine vignettes of roughly equal duration that take place on a single winter evening in a mythical town in the United States that’s so far north, it could be in Canada. The stories do not intertwine, but are loosely connected episodes about love, each with a captivating couple at its core.

With five actors playing twenty roles, Almost, Maine is truly an ensemble piece. In all of these small stories, human connections are made between strangers, or broken between friends and lost forever, or restored between lovers.

A woman, recently widowed, parks her tent in a stranger’s field so she can watch the Aurora borealis and the stranger believes he can fix her broken heart, which she carries in a paper bag. Gayle returns “the love” she has received from her boyfriend Lendall in sundry white luggage and demands that he does the same for her. Randy and Chad are long time drinking buddies (the only dialogue involving two guys) who could be taking their friendship to a different level – or not! These surreal episodes seem to belong in an alternate universe, but the actors somehow manage to make them appear quotidian.

First time director Kaitlin Williams (wisely) preferred not to go for blue-collar New England accents, but does allow the actors space to create characters and play off each other. Amy McDonald’s sturdy outerwear clothing reminded us (not that we needed to be) that Maine is a northern state. Set constructors must have had fun spraying suitcases, chairs, miscellaneous objects hanging from the ceiling – everything wintery white.

This Pacific Theatre production boasts a young cast of talented actors, though few show a huge range between separate characters. An exception might be Kim Larson, who shows terrific comedic timing. Giovanni Mocibob is assigned the straight roles, and as such is able to give excellent support to his cast mates. Peter Carlone seems capable of shifting seamlessly between comedy and drama.

For all its qualities and careful direction, Almost, Maine is never able to rise above being an entertaining rom-com.