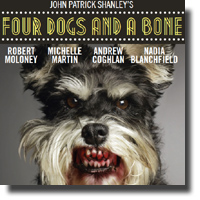 In Four Dogs and A Bone, four manipulative and dysfunctional people are involved in the production of a film. They are all arguing as to how the script should go, and who should and should not be in it. The story starts out with a stressed middle-aged producer Bradly played by Robert Moloney and Brenda (Nadia Blanchfield) a budding starlet. Brenda wants Collette (Michelle Martin) removed from the film. Victor the playwright played by Andrew Coughlan falls from grace when he chooses time with the film over his time at his mother’s funeral. There is constant verbal abuse in which all of the actors take part. Their constant stabbing at each other makes us dislike all of the characters in this play, which we can assume is the intention.

The actor’s in tonight’s performance do the best they can with this script that seems to lack in the direction department. The decibels should be considerably lower in the yelling scenes because this is such a small theatre. It is like someone yelling at you from across the street except that they are doing it right in your ear.
The script called for the same sexually-oriented gross phrase repeated numerous times. After the first time, this “S*** my D***” phrase loses its impact and makes the play seedy. This lack of impact may because of the way it is presented. Those same lines were of course in the New York production, but were directed differently.

Some funny lines are missed because they are fired out so rapidly that the audience doesn’t have a chance to hear them. The actors at the Havana know their lines well but they are in need of direction on how to present them. The audience’s connection with the characters is lost because of the speed at which the lines are being read. There is emotional distancing by throwing out what appears to be monologues instead of a connection with the other actors.

It is difficult to decide what genre this play is meant to be in... A biting satirical comedy is my guess. Four Dogs and A Bone was produced in New York as a comedy, and it was considered by some critics one of the funniest films in town. Tonight’s performance in Vancouver was uncomfortable. John Patrick Shanley, playwright, has a huge background of successful writing plays such as Moonstruck. Four Dogs and a Bone is a great play but its greatness in live theatre lies in the hands of the director.

Hopefully, the production staff at Egg Theatre can get a chance to see a video copy of the production that was presented in New York, make some changes and present this successful comedy as was intended. The cast at the Havana have great talent and I would like to see them make this play a success.