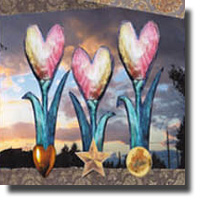 The North Vancouver Community Players’ presentation of Three Viewings is a lovely way to spend an evening, albeit in the company of funeral goers. This amusing play consists of three monologues revealing different people’s perspectives about near ones who have passed away - all connected through the community they have resided in.

This arrangement for a play presents a challenge to the director and actors, in that each character must “paint the picture” alone, with words and their own actions, and still carry the production forward. I suspect a great deal of respectful collaboration among Karen Golden, the director, and the three actors in pulling this difficult challenge off. It worked, and I salute Golden for the subtlety of her hand in this production. This extends to the production crew for the simple, yet versatile set and understated effects.

First, when we meet Emil, the undertaker, his strokes create the general landscape and the important elements in it. Hats off to Francis Boyle, whose difficult job it was to introduce us to the community of characters that comprise the common threads through the monologues. His Emil is a man whose personal life mirrors his job. Emil is essentially a character as devoid of dynamic life as the corpses he prepares for burial. His monologue reflects on an unfulfilled romantic element of his life. It is all about unaccomplished intention, just like the unfulfilled intentions of those who pass away. It is about appearances and propriety (so much like funerals), and the regret that comes from not really living while you have the chance. Poor pathetic Emil! And here’s to Boyle for making us think and care about him at all.

Mac is a shocking contrast to Emil. Mac certainly lives her life with vibrance and energy, and both scandalizes and endears the audience. Elaina Austin wears the character like a comfortable and familiar - and probably expensive - coat. She seems to own the experiences of this audacious woman. Austin carries off a fine balance of manic energy and outspoken self-control as Mac’s story reveals itself. In the end, we marvel at the person we have come to know; for that, Austin is to be congratulated.

Finally, we meet Virginia, a recent widow of a man whose business life has been a well-disguised disaster. Fran Heaney’s portrayal of Virginia is also nuanced and beautifully done. We see the subtle hints of insecurity, fatigue, endearing memories and fatalism that characterize so many who mourn. Virginia’s dry humour lightens her rather suspenseful conundrum, and the surprising revelation of her dead husband’s character surprises her as much as it does us.