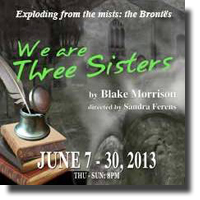 United Players
We Are Three Sisters by Blake Morrison

Unassumingly stylish with an austere, yet elegantly refined sensibility is one way to characterize Carolyn Rapanos’s eloquently understated set design for We Are Three Sisters. Equally stylish is the memorable chess-move precision with which director Sandra Ferens choreographs stage movements and articulates actions for her players in this taut poetic drama.

The central action of the play takes place in a Victorian-style living room and it derives much of its pivotal force from the tensions that exist between Branwell Brönte (Jordon Navaratil) and his married lover Lydia Robinson (Helen Martin); between Emily Brönte (Maria Luisa Alvarez) and her father’s curate (Nick Preston); and between Anne Brönte (Victoria Lyons) and the doctor (Douglas Abel).

The Bröntes are of course legendary for their literature, but this endearing production, with its inimitable family dynamic, does more than merely put a human face on these three sisters. It shows how an uncommon resilience and indomitable spirit on their part helps them overcome the often-stifling attitudes of paternalism, parochialism and provincialism.

Death may be all around them, as the graves outside their three tall living room windows and their poetic responses to those graves suggest, but it does not affect their passionate take on life and their vigorous rapport.

Navaratil brings to the stage an intense, brooding, bluster-ridden, ‘bully-boy-brother’ portrayal of Bramwell, while Ms. Martin seems to make no pretentions as the oh-so-refined object of his affection. Both characterizations elicit little in the way of sympathy from the audience, and both roles were capably handled by these two respective actors.

Unfortunately the relationship between Anne and the doctor is artificial and wooden, and in many cases the rapport seems singularly lacklustre. Ms. Lyons’s performance with her sisters is more notably vivid and expressive, but there seemed to be a certain chemistry lacking between her and Mr. Abel, which if present could have added a heightened dimension to the play. Admittedly, there are complexities and challenges in the role of the alcoholic doctor whose unrequited love for much-younger Anne drives him to despair; but an even darker, more pensive and melancholic interpretation, along with some slight hints of interest on the part of Anne might have gone a long way towards making the audience feel more sympathy, and less disdain for him or relatively less disregard for their relationship.

Ms. Alvarez brings a strong stage presence to her role as Emily. She does an admirable job of conveying Emily’s ideals of anonymity at all costs, either suffusing the stage with her smoldering passions or stifling those passions to inwardly seethe. Her expressive, ironic responses to the love-struck curate while they are on stage together in the last act meld wonderfully with her precisely choreographed moves to create palpable dramatic tension.

Blake Morrison’s script is impeccable. The music chosen by Neil Griffiths for scene changes enhances and intensifies the mood, even heightening suspense at times. The costumes designed by Elliott Squire are elaborate in all the right places, as is the previously mentioned set design. Although the acting is at times uneven, there is much to recommend in this production.