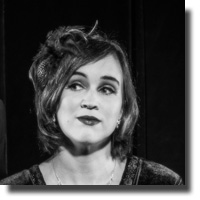 Barlowe's take on Hitchcock's mystery thriller is a zany mix of the film director's masterpiece with a dash of hilarious Monty Python. The play is a fast-paced whodunit by these excellent versatile actors who play multiple roles and also do the scene changes.

Jenny McLaren (Annabella/Margaret/Pamela) is fabulous as she tackles these three roles with fast costume changes and accents from German to Scottish. But even more gruelling and hilarious are Trevor Roberts and David Wallace who play all the other roles, from detectives to old women. Roberts was just amazing particularly for the role of Mr. Memory and Wallace for Professor Jordan. I could tell that these actors were having a lot of fun playing these diverse roles. Tom Parkinson (Richard Hannay), the main protagonist, is the only actor who plays the same role all throughout.

Barlowe is well-known as a comedic film actor, and you'd expect someone like him to do plays of this sort which was a big hit in Broadway, London and Australia. This is the opening play of Metro's 52nd season, and is a prelude of shows to come in their 2014-15 season with the upcoming comedy in January 2015, John Cleese's Fawlty Towers and Agatha Christie's thriller Go Back for Murder in March/April 2015.

Kudos to director Mike Mackenzie, actors and the Metro production staff for a delightful mise-en-scene.