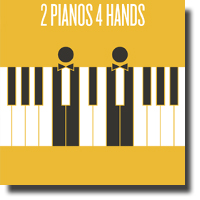 As a below average student of the piano, my mother would often persuade me to watch the frequent Marjan Rawicz and Walter Landauer concerts on BBC. If her plan was to inspire me to become a recital pianist – it failed. However, the legendary two-piano team with a remarkable precision of ensemble playing left me with an abiding appreciation of Bach, Beethoven and Mozart.

Listening to Ted Dykstra and Richard Greenblatt’s thrilling second act performance of Chopin’s Rondo for two pianos, four hands in C Major reminded me of those Rawicz and Landauer televised concerts. 2 Pianos 4 Hands is part concert and part autobiographical theatre that focuses on the trials and tribulations of two music students whose instrument of choice is the piano.

The show’s creators (and directors) Dykstra and Greenblatt use their own personas to reawaken idiosyncratic relationships with mentors, teachers and parents. They each alternate playing younger versions of themselves, while their partner assumes the role of influential adult.

But 2 Pianos 4 Hands is as much about life lessons as it is about piano lessons. The adage about not teaching your children to drive would also seem to apply to teaching piano. In one of many bittersweet moments we see Greenblatt’s father expecting his son to atone for his own deficiencies as a musician. After some acrimonious discussion, the pair reaches agreement on how future lessons will be conducted without Greenblatt Sr’s involvement.

There are also caveats for those who aspire. In Dykstra and Greenblatt’s separate disappointments at the rejection for advanced training at prestigious academies, we learn, sometimes hard work and dedication just aren’t enough.

Steve Lucas’s set comprises of two grand pianos set up so that the performers are facing each other. There are also two large frames hung with piano wire, similar in size, one with portrait orientation, the other landscape that function as video screens to designate time and place.

Although 2 Pianos 4 Hands has been previously mounted with surrogate actors, the play belongs to Ted Dykstra and Richard Greenblatt and its success rides on coattails of the duo’s fine musicianship and sublime comic timing.

This will be the last time that Dykstra and Greenblatt bring their 2 Pianos 4 Hands before retiring the show permanently. So get out and see it – at the very least, you will leave with a greater appreciation of Bach.