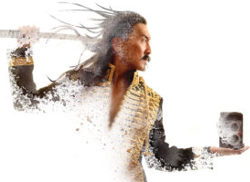 Tetsuro Shigematsu is a cultural critic, broadcaster, writer and performance artist. His voice may be already familiar due to his job as the final host of The Roundup on CBC Radio One. 1 Hour Photo is in essence a follow up pièce de theatre to Shigematsu’s previous work Empire of the Son. Both works are quite similar in style and presentation technique: both are what I call ‘legacy plays’ where Shigematsu puts himself in the role of storyteller rather than a central character.

Where Empire of the Son focused on his own father Akira Shigematsu, 1 Hour Photo is an approbation of the life of close friend Masanobu (Mas) Yamamoto. Mas is the father of actor and Artistic Director at Vancouver Asian Canadian Theatre Donna Yamamoto, and (until the recent election) Member of the Legislative Assembly of British Columbia Naomi Yamamoto. Like Shigematsu himself, Mr. Yamamoto is a Nikkei (trans. Canadian citizens of Japanese ancestry).

Born in Vancouver, Yamamoto was one of hundreds of Japanese-Canadians who had their assets confiscated and sent to internment camps following the attack on Pearl Harbour. Today, most of us accept this treatment of Canadian born citizens represents a dark episode in Canadian history. Yamamoto, a child at the time, learned not only how to survive in the camps, but through hard work and a “warrior spirit” rebuilt his life as a scientist and entrepreneur.

In presenting Yamamoto’s story, Shigematsu occasionally uses a table mounted, sliding camera focused on miniatures to recount compelling anecdotes, with the results projected live onto a screen behind him. He also allows his subject to relate some of the personal details himself by way of selected taped recordings pressed onto a vinyl disc and played on a turntable set up on stage.

Superbly written and performed, 1 Hour Photo is a universal story. However, while Empire of the Son was essentially a solo project, this production is very much a team effort. Sound designer and musician Steve Charles joins Shigematsu on stage for the entire 75-minute run time, playing keyboards, guitar and assisting with props set up.

At the end of the show, Masanobu Yamamoto, who had been seated in the theatre, was introduced to the audience. Now eighty, it doesn’t look like any of his “warrior spirit” has diminished with age.