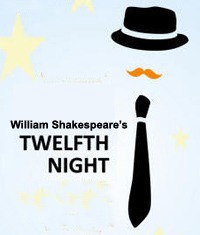 Western Gold Theatre’s production of Twelfth Night is a ‘script-in-hand’ performance by an all seniors cast who barely needed to glance at their script. Shakespeare’s most labyrinthine comedy has elements of mistaken identity, switching sexuality and even a suspicion of madness.

Some previous productions have tipped the balance between whimsical and wistful towards the darker aspects of the play. Anna Hagan has obviously considered the theatre space, the potential audience and the players to perhaps wisely decide to go for audacious comedy.

Just to make things simple, Duke Orsino (Terence Kelly) harbours romantic feelings for the Countess Olivia (Annabel Kershaw). He employs the service of Viola (Eileen Barrett), the female half of fraternal twins. She changes her name and gender to become Cesario and sets out to woo the beautiful Olivia on behalf of the shy duke. It all goes sideways when Olivia falls in love with Cesario, but Cesario has already fallen in love with the Duke.

There is also a precarious subplot: Olivia’s servant, Maria (Marlee Walchuk) together with her cohorts Sir Toby Belch and Sir Andrew Aguecheek (Dave Campbell and Bernard Cuffling) play a cruel trick on Malvolio (Steve James). They strategically leave a fake letter for him indicating that Olivia is ready to return Malvolio’s affections. Knowing all about his vanity, Maria stands back and waits for Olivia’s steward to make a fool of himself.

Much of the play's physical comedy comes from tormenting poor Malvolio, but it’s Steve James who gets kudos for his pretentious nuances in taking on the play’s only real villain; although, I never got the significance of his yellow stockings and cross garters. It is from the phlegmatic Malvolio that one of Shakespeare’s most famous quotations is derived: “Be not afraid of greatness: some are born great, some achieve greatness, and some have greatness thrust upon them."

The very talented Marlee Walchuk does more with what would seem a simple role as the Countess’s feisty servant than might be expected. David C. Jones pops up everywhere in a miscellany of supporting roles. Eileen Barrett and Annabel Kershaw each turn in dignified performance in their own way and provide a perfect foil for some over the top performances. Vince Metcalfe as the foolish Feste is ludicrously funny, but who on earth assembled his costume!

This production of Twelfth Night is full of camp and good performances. If you don’t mind the players shuffling and turning over papers you can sit back and enjoy the fun.