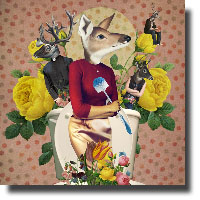 Pacific Theatre
100 Saints You Should Know by Kate Fodor

Kate Fodor’s second play, 100 Saints You Should Know, has plainly little to do with saints, but more to do with lost souls. It’s a conventional play about five conventional people. Two of them, a priest and a single mother, are having a crisis of faith. Two others, a rebellious, rambunctious sixteen-year-old and a perplexed, simple-minded delivery boy, have no idea about which path their parents are leading them on to – they just know they don’t want to go there.

That leaves Colleen (Kerri Norris), an Irish Catholic immigrant and mother of the priest, Father Matthew McNally (Joel Stephanson). She is the only one that is totally unambiguous about her faith or her ipseity. With Colleen, there is only black and white and no shades of grey.

Fodor’s play attempts to grapple with provocative and controversial subjects, yet never really provides answers to its own questions. “Prayer is a surge of the heart” is a recurring maxim heard throughout the play, but never quoted by anyone who aspires to believe it. The issue of homosexuality in the priesthood is dealt with cryptically through Father Matthew possessing homoerotic photographs torn from a volume of George Platt Lynes’ illustrations.

Former wild-child Theresa (Rebecca Deboer) now a single mother to Abby (Katherine Gauthier) is a contract cleaner at Father Matthew’s church and discovers something of a spiritual revelation when catching one of his homilies. When she finds that all his belongings, save for a book, have been removed from the sacristy, she makes the two hour drive to his mother’s home on the pretext of returning his book. It soon becomes evident to both Theresa and Colleen that Father Matthew has been put on a forced leave of absence from his church.

But it’s when Theresa drags along her mischievous daughter and leaves her alone to wait behind in the car that the situation spirals out of control. Abby meets Garrett (Chris Lam) who has come to the house to get advice from Father Matthew. Realising that Garrett is hardly her intellectual match; she goads him into getting drunk. The subsequent disastrous events propel everyone into an emotional tailspin.

100 Saints is a true ensemble production with the entire cast taking equal responsibility for the play’s success. Kerri Norris and Katherine Gauthier perhaps deserve special praise for delivering such a vivid contrast of the spiritual divide.

Lauchlin Johnston’s awkward staging is more symbolic than functional. It consists of a white-painted modified cruciform structure mounted on a platform with a sloping surface. The platform takes up almost the entire area of the stage floor. Some pivotal scenes are aided by projected images on the east wall, which unfortunately, can only be seen by the section of the audience seated on the west side.

Alas, 100 Saints doesn’t really offer more than a ‘tune-in-next-week-for-the-conclusion’ ending. Spiritual fulfillment is too heavy a subject to be revealed in a hundred minutes, but even an ad hoc conclusion might have been at least somewhat satisfying.