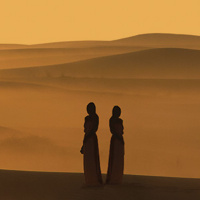 A Thousand Splendid Suns by Ursula Rani Sarma, based on the book by Khaled Hosseini

It is always nerve-wracking seeing a live performance of one of your favourite novels – will the performers and script do the beloved story justice? This production marks only the seventh time this play has been produced, so I was excited to have the opportunity to see it in Vancouver.

A Thousand Splendid Suns is the latest production in an innovative partnership between the Arts Club and the Royal Manitoba Theatre Centre, following last season’s Matilda: The Musical. The Manitoba production will take place in March 2020. The Arts Club also partnered with Canadian Women for Women in Afghanistan, who will be on site in the lobby during select performances.

At first, I was put off by the non-linear fashion of the storytelling, but it soon became apparent that introducing the characters, then learning more about their childhoods via flashbacks was a very effective tool to create suspense.

The setting is 1990s Kabul and the sound design by Jake Rodriguez truly transports the audience to another world. Costume design by Linda Cho also impressed, as members of the Taliban came to life in front of our eyes.

The highlight of the production truly is the relationship between Laila (Anita Majumdar) and Mariam (Deena Aziz) as two women whose lives intersect and lead to unimaginable consequences. The actors manage to inject a healthy dose of humour into an otherwise serious story, and the audience was captivated, gasping and cheering as their lives unfolded.

A surprising stand-out was Arggy Jenati as the memory of Mariam’s mother, appearing throughout the story and demonstrating that we are all haunted by the ghosts of our childhoods. Another special moment was the rapport between Laila and Tariq (Abraham Asto) when their characters reverted to their childhood counterparts.

This was the first production I’ve seen that bravely chooses to tackle difficult topics, including domestic violence, childbirth, miscarriage, and suicide, on stage. It is staged sensitively and artistically, with effects like slow-motion and artistic movement alluding to the passing of time. Choosing to have the adult actors also portray their younger selves was an interesting creative choice, but one that really resonated.

The minimalist yet visually stunning set design by Ken Macdonald combined with the lighting design by Robert Wierzel created some truly remarkable backdrops. This production is visually mesmerizing – there were moments where I wished I was a photographer and could capture the beauty to frame and remember for years to come.

Fans of the best-selling novel, as well as patrons new to Hosseini’s story will experience the production in very different ways, yet all will leave satisfied.

Director Haysam Kadri summed it up best with his quotation in the program: “A Thousand Splendid Suns can remind us that every person under a veil, and every refugee travelling across lands, has a universe inside them.” In today’s political climate, this message is especially relevant.