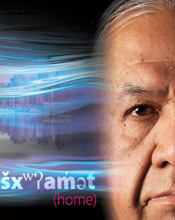 It appears that Canada may be a house, but not a home. In a powerful presentation that has toured Alberta and British Columbia, xw?am'et (Home) focuses on the meaning and responsibilities inherent in reconciliation between Canada’s indigenous and non-indigenous people. It is an evening for self-examination in an effort to understand that reconciliation must be a living process that involves everyone. It is not an evening of entertainment as such, but rather an opportunity to begin understanding perspectives and experiences that, perhaps, we have not fully appreciated before.

The evening is directed by David Diamond. It begins with 30 minutes of moving episodic vignettes by the talented cast. Various scenes of the presentation are then replayed, with the audience invited to stop the action at any point, and take the place of any player, to change the dialogue and action in a way that might move toward a more effective road to reconciliation in our society. Diamond facilitates by drawing out the reasons for audience intervention, the emotions involved, and the possible consequences of the new directions hoped for by the audience members involved. To the company’s credit, counsellor/healers are available for what proves, for some, to be an extremely emotional experience.

High praise must go to the actors in this evening’s presentation. Every player represents an issue in Canada’s conundrum in bringing a mutually satisfying resolution to relations between our First Nations and non-indigenous populations. In moving performances, Asivak Koostachin, Margaret Roberts and Joey Lesperance highlight the issue of cultural eradication resulting from the adoption of indigenous children into non-indigenous families.

Sam Seward ably presents the struggle of residential school survivors finding ways to parent a new, culturally aware generation without succumbing to emotional and spiritual collapse from memories that have been carefully locked away for survival’s sake. Madeline Terbasket is a force as his daughter who is frustrated by her father’s often short-tempered refusal to engage in her interest in her cultural heritage and its ties to the land.

Nayden Palosaari strongly portrays the stereotype of a proud man who has turned to alcohol to numb his unspoken pain, and struggles in his search for the redemption of his self-respect and dignity.

Mutya Macatumpag gives a spirited performance as a young non-indigenous environmentalist frustrated in her attempts to feel accepted by her First Nations friend in their common interest in protecting the land.

These actors deserve high praise, not only for their scripted performances, but for their ad lib work in each scene, as audience members took over and steered the scene to different places. Kudos to them all.

The overwhelming sense for this reviewer at the end of the evening was that neither indigenous nor non-indigenous people in Canada feel accepted or appreciated by the other. Neither (admittedly amorphous) group feels at home because of the attitudes and actions of the other. Canadians of all backgrounds are left to wonder, “If this land is yours, how can it be mine?” To make reconciliation work, every Canadian must actively live in our communities to create the feeling that Canada is ours together. Attend, and be moved to action.