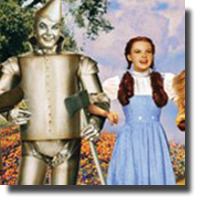 The VSO presents The Wizard of Oz was one of the most entertaining events I’ve recently attended in Vancouver. Audience members were excited to be there and arrived in costume – there were numerous "Dorothys" ranging from pint-sized to the elderly. From flying sock monkeys to cross-dressing Glindas (the good witch), this was the one event I’ve been to where mingling in the lobby was almost was entertaining as the show itself. The best part was watching the characters attempt to take their seats, and several "Tin Men" realizing their box-shaped costumes weren’t quite conducive to the Orpheum seats!

The Vancouver Symphony impressed, as always, playing the music of the popular film while projecting the movie onto the big screen above them. Yet again, the VSO provided quality family entertainment where generations could attend the same event and have an equally great time. No speeches were made; the conductor and orchestra knew what the crowd had come to see, and launched right into the opening credits. When the “good characters” defeated the “bad characters” the audience would clap and cheer, and whenever a new character appeared on screen, his costumed counterpart in the audience would receive recognition from nearby audience members with playful nudges and shouts of “there you are!” Some energetic audience members even sang and danced along to the film, when they weren’t busy posing for photographs with new friends.

I am grateful I had the opportunity to follow the yellow brick road to the Orpheum Theatre, and hope the VSO offers similar costume-optional movie classics in the future. I will definitely return!