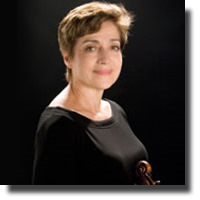 The Vancouver Symphony Orchestra opened their 97th season with a repertoire that should offer something for everyone. Immediately following the customary playing of O Canada (performed at all VSO season openers), the orchestra stepped right into Hector Berlioz’s boisterous ten minute, overture, Le corsair. Like many of the French composer’s overtures, it begins with a bustling allegro, to be followed by a meditative stillness. The allegro’s strident theme is recalled in the rondo for a sparkling finale.

Ludwig van Beethoven was better known for his nine symphonies and who-knows how many piano sonatas than for his one-and-only violin concerto. His Violin Concerto in D Major is certainly epic taking around forty-five minutes to perform in its entirety, demanding stamina from the soloist and intense concentration from the listener. I found Miriam Fried’s performance meticulous, rather than spontaneous, nonetheless, her exquisitely played rondo made for a dazzling finale, showing off the melodic range of her 300-year-old Stradivarius.

After the intermission, Canadian composer Vivian Fung came on stage to introduce the first public performance of her new work Biennale Snapshots. Dr. Fung described the work as a celebration of Vancouver Biennale’s (pron. bee-en-ah-lay) 2014 – 16 public art installations. Set in five movements, with each movement “a musical snapshot” of five different artworks from the exhibition.

The first movement supposedly depicts Sumakshi Singh’s meditative Breath Song, but actually sounds like the end of a difficult yoga class. Without a break, the second movement, Tree, is inspired by Konstantin Dimopoulos’s Blue Trees and features Jeanette Jonquil’s spirited solo clarinet. The third movement, the aptly titled Graffiti Mashup is a cacophonic nod to the highly visible six painted concrete silos on Granville Island. The music has an industrial affectation, and not especially easy to listen to. Heroic Chinese contemporary artists Ren Jun and Ai Weiwei have their outdoor exhibits extolled in Interludium: Water Rising and Grass respectively.

Maestro Tovey ended the evening with The Suite from Der Rosenkavalier by Richard Strauss. Judging from his tongue-in-cheek, introductory remarks and his enthusiasm during the orchestra’s performance, the operatic score would appear to be one of his favourites. The suite opens with the opera's orchestral prelude evoking a tempest of passion generated between two of the opera’s main characters, Octavian and the older Marschallin and closes with a lusty Viennese-inspired waltz.

The orchestra showed no signs of languor after the holiday season break. Vancouver concert-goers can certainly look forward to a banner year of great music in the 2015 – 2016 season.