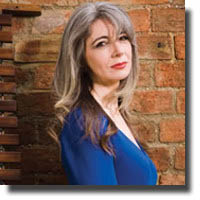 The Vancouver Symphony Orchestra’s 95th season opening event was preceded by the obligatory presentations and back-slapping speeches. In attendance were British Columbia Premier Christy Clark and Vancouver City Councillor Elizabeth Ball to hand out certificates of induction to Maestro Bramwell Tovey and the entire Orchestra to the BC Entertainment Hall of Fame.

When the music finally started, Dame Evelyn, now with waist length gray hair, showed why she is regarded as the world’s foremost classical percussionist. The Aberdonian musician’s technique is particularly evident on Randolph Peters’ Musicophilia, a VSO commissioned work for Dame Evelyn. The sprawling six movement piece could be considered as a concerto for solo percussionist. It was evidently inspired by Oliver Sacks’ book Musicophilia: Tales of Music and the Brain.

The first movement, Amusia felt as if it was improvised, but in fact faithfully follows a noted score. Amusia is a disorder that manifests itself in the ability to process pitch, and may also affect musical recognition. Glennie perpetrates this condition through the clattering of pots and pans. The second and third movements have a more conventional structure which Glennie attacked by playing across a marimba, a vibraphone and a xylophone.

In the fourth movement, aptly named Earworms, we hear well-known melodies infiltrating the base structure. The fifth and sixth movements are perceptively more euphonic and may tempt one to describe the arrangement as symphonic rock. The featured performer was certainly up to Peters’ unique score as she introduced the waterphone; an unusual instrument, that when played with a bow produces a sound similar to that of a whale (see photo above). Maesto Tovey urged out a purposeful and stirring reading of this piece which is hardly for the musical milksop. The VSO delivered every bit as exhilarating a performance as that by its featured soloist.

A change to the programme saw Verdi’s Overture to La Forza del Destino moved to the second half of the concert. The atmospheric overture is acknowledged as the finest of Verdi's symphonic intros and the orchestra’s performance was worth the extra wait.

Lead flautist Ms. Reside was also featured in Ravel’s Bolero, the evening’s final selection. The opening bars are deliberately basic. As the persistent single drum beat became more emphatic the orchestra’s own lead percussionist Vern Griffiths was joined at centre stage by Dame Evelyn to bring the Bolero to a glorious end.