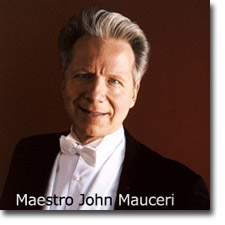 What do Danny Elfman and Johnny Depp have in common? Well, they both owe a large part of their film careers to Tim Burton. Elfman in particular has enjoyed a cinematic collaboration that has lasted for a quarter of a century.

Under the firm direction of Maestro John Mauceri, the orchestra led the audience through a spectrum of Elfman’s symphonic soundscapes supported by a multimedia montage of film clips and Burton's self-created original storyboards. Though not performed strictly in chronological order, the repertoire covered the entire fifteen film scores the composer has created for Burton, from their first project Pee-Wee's Big Adventure up to last year's Frankenweenie. The concert opened with the score composed for Charlie and the Chocolate Factory that served as both the aural and visual overture.

Burton films are typically associated with a macabre or even ghoulish element. It’s perhaps not surprising that Elfman’s music would be evocative of these dark themes. The selections ranged from gothic (Batman and Batman Returns) to stark and percussion laden (Planet of the Apes). The exception was the ambrosial suite with its circus motif composed for the 2003 film Big Fish.

The UBC Opera Ensemble brought out a few ironic chuckles from the audience with their pastoral refrains of "Day-O" borrowed from the Jamaican calypso-styled Banana Boat Song for Beetlejuice.

Original soundtracks are considered to be most successful when not supraliminal whilst watching the film. However, anyone who has sat in a theatre and seen Edward Scissorhands, surely couldn’t avoid being stirred by its charming melody. The orchestra, together with the female (only) voices of UBC Opera Ensemble’s interpretation of Scissorhands’ sweeping “Ice Dance,” along with Dale Barlthrop’s lavish violin solo, got the vote for my personal favourite.

Tim Burton films have attracted quite a cult following and are as much renowned for ostentatious costumes as their iconic scores. This was evidenced by many patrons showing up in character representative of the Mad Hatter, Edward Scissorhands and Beetlejuice. One gentleman sat through the concert dressed up as the Mad Hatter complete with a huge top hat – glad I wasn’t sitting behind him.