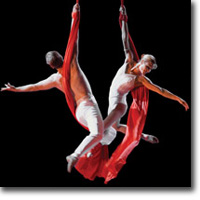 On Saturday evening I found myself once more within the walls of the majestic Orpheum in downtown Vancouver. While standing in the foyer I noticed a stark difference in the gathering crowds than I had seen at VSO concerts in the past. Not only was the evening’s performance visibly well attended, but there was also a large following of young and stylish concertgoers present. The air was alive with excited anticipation as the announcer marked the ten-minute mark to performance and I made my way to my seat.

The evening featured the troupe of Cirque de la Symphonie, in concert with the Vancouver Symphony Orchestra, bringing together two magnificent art forms on to one stage. The evening commenced with a bright orchestral piece, Festive Overture Op.96, which highlighted the precision and control of dynamics that the VSO is capable of. The following piece, a Brazilian samba, introduced us to the mime jester and one of the belle’s of Cirque de la Symphonie. This duo presented their audience with a charming magic show featuring the quickest costume changes I have ever seen with my own two eyes.

Danse Macabre, one of my favourite pieces and performances of the evening, was presented next. The stage was darkly lit, with only a single rope suspended from the ceiling as a lady in red walked with poise in to position. In a perfect balance between athleticism and grace, she climbed and entwined her way through the majestic piece, the shadows of her daring movements dancing on the walls of the Orpheum. A deafening silence enveloped the room as audience members of all ages leaned forward for a better view, gasping in unison at common intervals.

The next two orchestral pieces were accompanied by the impressive juggling skills of the jester, who was a clear crowd favourite for his animated facial expressions and generally goofy antics. The concert proceeded with a selection from the VSO, Danse des Bouffons, followed by two Russian pieces to round off the first half of the evening. The first of these, Valse from The Sleeping Beauty, featured a gymnastic routine performed atop two connected stools. Each movement was precise and controlled, highlighting the athlete’s astonishing flexibility. The second, Fandango Asturiano, opened with an enchanting solo from the concertmaster, Dale Barltrop, and was accompanied by an aerial hoop act.

The second half of the evening commenced with a magic show to the tune of Swan Lake’s Danse des Cygnes. This time the cirque performers involved the conductor, leaving the musicians to their own devices, in an amusing and confusing costume swap skit. This was followed by a black-lit juggling act by the jester, and rhythmic ribbon dance.

The Waltz of Swan Lake, another highly memorable performance, featured an aerial acrobatic duet. With the use of two sheets of silk suspended from the ceiling, the two aerialists offered their audience an emotionally charged physical masterpiece. Supporting and depending on each other’s strength and stamina, they soared, spiraled, and posed high above the watchful eyes and dancing bows of the scene below.

The finale, set to the tune of Tocatta & Fugue in D Minor, comprised one of the most awe-inspiring acts of physicality that I have ever witnessed. Two men, large in stature and musculature, took the stage with concentrated movement, making their way on to a box that was placed in front of the orchestra. Covered in gold paint, the men struck a ‘thinker-esque’ pose before transitioning in to their opening feat – a balancing act of one man holding himself in a one-handed handstand atop the other’s head. His partner and foundation, who was seated on the ground, then astonished the audience by planting his feat and bringing himself to a standing position while the invented man remained stationary in his pose. The remainder of their performance included one incredible stunt after another, often including elements of inversion, contortion, and deliberately slow transitions. The trust and stamina that went in to this act was unbelievable and was rewarded by possibly the loudest roar of applause that I was heard within the Orpheum walls.

As the orchestra and cirque performers took their bows to a well deserved and drawn out standing ovation, I was saddened for just a moment that the evening had passed so quickly. The Cirque de la Symphonie had lived up to and far exceeded my expectations, leaving me with the memories of an evening not easily forgotten.