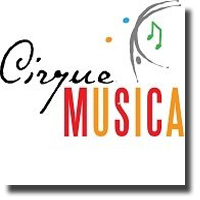 Saturday night’s concert at the Orpheum Theatre was, if not unique, certainly a rare opportunity to witness collaboration between circus troupe Cirque Musica and a live Symphony Orchestra. Partnering classical music repertoire with an assortment of dazzling cirque acts is not of itself brand new, but to have acrobats, jugglers, aerial dancers and a Rolla-bola artist performing on the same concert stage as a full orchestra can be pretty mind-blowing.

It was fitting that associate conductor Gordon Gerrard opened the musical selection with an agile interpretation of Julius Fucík’s Entry of the Gladiators – very much the clichéd gambit for the Big Top.

It was difficult to discern whether the circus acts were arranged to complement the music, or the music was chosen to symphonise with physical performance. Regardless, the two elements integrated naturally. The first act featured Simon Arestov balancing unpropitiously atop metal cylinders to the orchestra’s accompaniment of Rimsky-Korsakov’s Flight of the Bumblebee and Jacques Offenbach's Orpheus in the Underworld (Can-Can).

Paul Dukas’s The Sorcerer’s Apprentice is offered up as accompaniment Vivián Espana’s specialty act – dancing with multiple hula-hoops, while double-jointed gymnasts were “getting bent out of shape” to Modest Mussorgsky’s Night on Bald Mountain. But without doubt the audience favourite was eleven years old Elan Espana, who mesmerized everyone with his astonishing juggling skill with the Chinese yo-yo appropriately augmented by Aaron Copeland’s ballet score Rodeo.

This was not a symphony concert for the purist. The audience’s enthusiastic clapping and cheering at the circus performers was an obvious distraction for those wanting to enjoy the music. Although, perhaps as a concession to the few who only came to listen, Gordon Gerrard led the orchestra an interesting arrangement of John Williams’ Imperial Death March from Star Wars and a musical salute to the Beatles without visual diversion.

The show wasn’t without gimmickry. Veronica Gan played the second part of Tchaikovsky’s Violin Concerto while suspended twenty feet above the Orpheum stage. During which, Duo Resonance, a male-female balancing / dance act is performing below. Of course, she was held with a safety wire, but what if she dropped that fragile and expensive violin? Ouch!