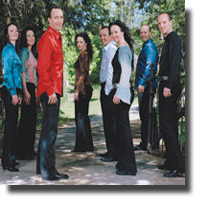 The VSO warmed up the crowd with “Simple Gifts.” Many audience members easily recognized the “Lord of the Dance” theme song that was based upon the original “Simple Gifts” tune. The Leahy family entered to tremendous applause – the seven siblings performing tonight come from a musical family who have been performing together their entire lives and have won several Juno awards. Donnell Leahy served as our host for the evening, sharing fun anecdotes about the family growing up and learning to play various instruments. Donnell shared his family’s roots (Irish and Cape Breton) and told the audience: “We’re all Irish tonight!”

The evening was quite a contrast – the VSO is always so structured and professional, while the Leahy family prefer to play music by ear and communicate with each other via body language that only siblings would recognize! We did not hear as much of the VSO as we normally would, as they only accompanied Leahy on some of their numbers.

Perhaps the highlight of the evening for many was when Donnell introduced a young Leahy from the next generation who wanted the opportunity to play in front of an audience. Young Xavier Leahy brought down the house with his joyful accordian music. The VSO performed “Danny Boy” and then – one of my personal highlights, the suite from “Far and Away”.

The second half of the evening began with Steven Reineke conducting “Beautiful Day: The Songs of U2” which was enjoyed by all. Leahy then returned to the stage and finished off the night with six more of their songs, finishing with their popular “The Call to Dance.” They received a standing ovation and provided an encore, and the audience (some who came dressed in shamrock gear) left the Orpheum with smiles on their faces, ready for St. Patrick’s Day!