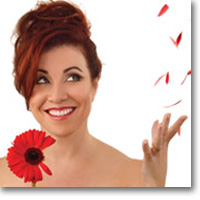 The Friday concert featured the Tony award-winning singer Debbie Gravitte. Regular VSO concert goers will remember this vocalist from the 2009 season performance of Three Broadway Divas when she shared the stage with Jan Horvath and Lisa Vroman.

Gravitte has been cast in numerous Broadway productions, including Chicago and Les Miserables. She has performed also performed nightclub acts worldwide, and shared the stage with a variety of orchestras. She has been called one of the best voices on Broadway, and conductor Jeff Tyzik added that not only is her vocal range impressive, but also her range of emotions.

The evening commenced with an orchestral Gypsy Overture, followed by Gravitte’s Tony award-winning rendition of Mr. Monotony by Irving Bell. Her air of confidence was more than apparent as she took the stage with a sassy Diva persona complete with multiple wardrobe changes throughout the night.

Midway through the first half, the VSO performed a selection from Tyzik’s favourite musical, My Fair Lady. The arrangement was compelling and beautifully developed, while the orchestra itself was mesmerizing to watch. There’s something about witnessing the waltz of bows and organic movements of instrument and musician in unison that sends chills down my spine.

Next up was, as Gravitte put it, “one of the most famous songs of all time”, Over the Rainbow. This song offered a glimpse of the softer side of the diva, which was both elegant and emotional. It was in this song that I first felt a connection to this talented singer.

Something about Broadway that I’ve always found is that you need to connect with the person behind the voice for the lyrics and melody to really speak to you. Each song is a story in itself, and the singer must embody the characters behind its telling.

While Gravitte certainly had a larger than life personality and a charismatic, bold, and stunning voice, there was some personal touch missing in the first half of the show. This may have been a symptom of jet lag, or simply because she neglected to glance up at the balcony seats for the majority of her pre-intermission songs. However, the touch came in the second half.

Following intermission, Gravitte entertained us with an energetic performance of When You’re Good to Mama, providing us a glimpse of her Matron ‘Mama’ Morton role from Broadway’s Chicago. This song was one of my favourites of the concert as it showcased that range of emotions that Tyzik had alluded to earlier in the evening.
The award-winning vocalist rounded off the evening with a chilling delivery of Memories, from Cats. She prefaced the song with an admittance to having avoided singing this song for many years – a confession which brought a smile to my lips as I thought about the years I’d spent listening to my sister grapple with its challenging emotional and technical levels.

This is one of my favourite Broadway songs, and as such, I always feel nervous when hearing it live – hoping that the vocalist will soar through the song’s complexities. While Gravitte’s vocal styling had a few too many ‘scoops’ for my picky tastes, it was performed wonderfully all in all. She began with a soft and delectable introduction, and transitioned with grace through the emotional tango between anguish and control into the last few tormented bars.

After a heavy round of applause, our diva returned to the stage for an encore performance of Don’t Cry for Me Argentina. The arrangement chosen was one specifically written for an orchestra, and was hauntingly beautiful to listen to. It was a lovely way to end an enchanting evening of high quality music and entertainment.