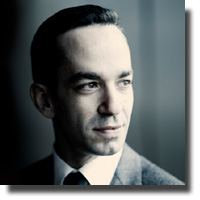 The Vancouver Symphony Orchestra’s 96th season opening event was preceded by the obligatory back-slapping speeches. This evening however, composers Jocelyn Morlock and Kelly-Marie Murphy managed to bring a little levity to the occasion.

When the music finally started, it was perhaps fitting that the first piece performed was Ms. Murphy’s deliberately chaotic A Thousand Natural Shocks. It’s theme of a new beginning rising from chaos was in keeping with Vancouver’s Saturday evening traffic - the result of the “perfect storm” of VSO’s opening gala concert coinciding with Vancouver Opera’s season opener and the Film Festival.

The curious title of Murphy’s adventurous, ten-minute work comes from Shakespeare's Hamlet, where Hamlet contemplates suicide in his despondent soliloquy. Originally commissioned by the CBC, it had its premier performance fourteen years ago during Bramwell Tovey’s inaugural concert as music director with the Vancouver Symphony Orchestra.

The piece begins with extended percussion, awaiting the orchestra to enter with a loud, labyrinthine musical concinnity. In addition to the opening percussive solo, the piece also features solos for harp, oboe and flute.

I’ve never been a devotee of Johannes Brahms. I’ve mostly considered him to be the lullaby composer. In his Piano Concerto No. 1, the first movement, played in a minor key, seems to go on forever, and continue from there. Nonetheless, featured performer Inon Barnatan plays the piece with masterful precision and indeed mitigates much of my skepticism for the composer. In his reading of Brahms’ first piano concerto, he communicates a perception of a large-scale work, shaping the contrasts and exchanges without losing sight of coherence.

Richard Strauss' epic tone poem Also Sprach Zarathustra is a sonic spectacular. The opening fanfare is possibly better known as the theme to Stanley Kubrick's 1968 film 2001: A Space Odyssey. From its stirring, brassy opening to Christie Reside’s solo flute in the closing Night Wanderer, the orchestra gave a beautifully paced and balanced performance.

A memorable evening ended with an enthusiastic ovation from a supportive audience.