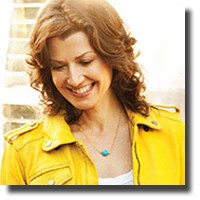 Amy Grant knows how to make memories live large like a present from the past, but she also mingles yesteryear reveries with currencies of faith, friendship and a refreshing brand of self-acceptance that is both enviable and visionary. It is hard to say what was more impressive about this concert: Ms. Grant’s extensive repertoire of hits or the way the Vancouver Symphony Orchestra succeeds in augmenting and enhancing them without once appearing to submerge or overwhelm.

Ms. Grant’s homespun wisdom and down-to-earth winsome manner of sharing her personal memories and anecdotes with the audience are as endearing for her free-spirited tone as they are for her genuine warm-hearted sense of humour and genial affability. These impressive personal attributes contribute significantly to the subtext of mainstream musicality suffusing hit after hit of oh-so-catchy melodies, and this goes a long way toward making it easy to forgive the occasional momentary lapse in an otherwise unbroken string of stellar vocals.

Sacrifices must be made in any song list when drawing upon the catalogue of so distinguished and contemporary a career, but it might arguably be better to sing a perennial favourite original like “In a Little While” rather than fall back on covering a crowd-pleasing Joni Mitchell “Big Yellow Taxi.”

Admittedly, Ms. Grant did justice to side one of her Age to Age album by doing a wonderful solo version of “El-Shaddai;” and then kicking off the second set with an emotionally expressive, sonically-sumptuous, symphony-laden showcase of “Sing Your Praise to the Lord.” Still and all, several among the audience were disappointed that she did not sing more of her earlier songs.

The self-acceptance of one of Grant’s new songs, “Don’t Try So Hard” might on the surface seem a little like an anthem for mediocrity, but at its heart it is less about settling than it is about serenity in the face of avid or driven determination to make the relentless pursuit of potential into a pretext to settle for nothing short of perfection. This song and the spirit of the woman who sings it is really saying that there is only one form of perfection—Emmanuel.

Ms. Grant kicked the evening off by expressing the hope for what she called a “cross-pollination,” and the audience were treated to a couple of numbers that were exclusively VSO, including a stirring rendition of “Someone to Watch Over Me.” The crowd, just over half of capacity, might well have come away with a greater appreciation for symphony, especially after the powerhouse multiple crescendos on Amy Grants rousing version of “Emmanuel.”

There is no doubt, though, that her encore performance of “I Will Remember You” left an indelible impression, capping off a memorable night of spectacular symphony and singing by a modern legend of contemporary Christian and popular music. Amy Grant knows how to make memories live large.