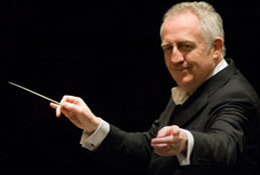 The Vancouver Symphony Orchestra opened their 98th season with a repertoire that offers something for just about everyone. Immediately following the customary playing of O Canada (performed at all VSO season openers), the orchestra breezed right into Jocelyn Morlock’s delightful Oiseaux bleus et sauvages (blue and wild birds). The VSO commissioned work is introduced with piccolo and flute evoking the chirping of bluebirds, continuing with finger plucking on violins and cellos that educe birds in playful flight.

The Tchaikovsky Piano Concerto has a high bar. The work has been so often performed that one might be forgiven for wanting to compare Australian pianist Alexander Gavrylyuk against the others. Mr. Gavrylyuk, a brilliant technician, takes on Tchaikovsky’s knuckle-crunching piece with stunning agility. Some concert pianists display an almost mercurial delicacy that makes the score seem easy to play; Gavrylyuk’s aggressive playing, however might come with a “don’t try this at home” warning.

Fans of Monty Python will instantly recognise the plaintive first movement, since it was used in both Monty Python's Flying Circus and The Meaning of Life soundtracks.

Alexander Gavrylyuk’s dynamic style and natural instinct impels you to listen to this music with renewed relish. He is the consummate concert hall musician. Following a standing ovation from an appreciative audience, he generously indulged his admirers in an encore in the form of a charming Ukrainian folk tune.

Igor Stravinsky’s The Rite of Spring (le sacre du printemps) caused quite a stir when first performed as a ballet in Paris a hundred years ago. It has since become a staple in every symphony orchestra’s repertoire.

This weekend’s performances by the Vancouver Symphony Orchestra under the baton of Maestro Tovey may not have had the histrionics of that inaugural production, but it nonetheless provided an impelling anticipatory experience when performed by the VSO. Maestro Tovey’s reading of Stravinsky’s celebrated oeuvre brought meticulous focus from the melodic bassoon solo that introduces Part One: the Adoration of the Earth to the orchestra’s dynamic contrasts with emphasis on the percussion section.

Overall, this concert was a fine start to the VSO’s Masterworks Gold Series.