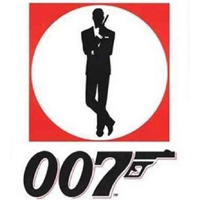 This weekend (January 10 & 11) the Vancouver Symphony Orchestra joined the rest of western hemisphere in celebrating fifty years of the James Bond film series with a musical tribute. Movie-goers who saw every single one would have seen no less than 23 films. Six actors: a Scot, an Irishman, a Welshman, an Australian and two Englishman have shared the role of the fictional MI6 agent in the Harry Saltzman and Albert "Cubby" Broccoli franchise, originally based on a series of books by Ian Fleming.

One had to know that such a selection would start with the iconic “James Bond Theme” written by Monty Norman and originally performed by the John Barry Orchestra. All the early Bond movies used some arrangement of this theme.

The orchestra continued under the leadership of American conductor, John Morris Russell with a brassy arrangement of “On Her Majesty’s Secret Service” that was faithful to the John Barry original. The film introduced former model and used car salesman George Lazenby as the “new” 007.

At this point, Maestro Russell introduced featured vocalists Ron Bohmer and Capathia Jenkins to the stage to sing “Thunderball” and “For Your Eyes Only,” respectively. Bohmer’s rendition was a little ‘too Broadway’ for the John Barry composition, but Jenkins’ interpretation of the Sheena Easton hit almost stopped the show.

Maestro Russell was almost apologetic for the inclusion of the Dr. No Suite in the repertoire, which, in substance, is a variation on the “James Bond Theme.” The title did give the Maestro an opportunity to poke fun at Canadians culture of civility.

Dame Shirley Bassey (who turned 77 a couple of days ago) is arguably the most legendary interpreter of Bond songs, having performed three of them. However Ms. Jenkins won over the entire audience with her powerhouse rendition of “Diamonds Are Forever.”

Maestro Russell and the orchestra brought a more eclectic selection to the second set, that included not only more songs from the James Bond franchise, but musical scores from an array of “spy-fi” (a subgenre of escapist spy fiction) films and television shows. Since the first set began with the “James Bond Theme,” it seemed perfectly natural to re-start with Quincy Jones’ endearing “Soul Bossa Nova,” better known as the Austin Powers theme.

Going off audience consensus, the concert’s vocal highlight was Capathia Jenkins’ cover of Adele’s lush and gorgeous “Skyfall.” The song is a fusion of an old-style theme and a contemporary ballad.

A minor disappointment was the exclusion of one of my personal favourite Bond themes: "The Living Daylights" originated by A-ha the Norwegian rock trio. However, the orchestra’s encore of “Goldfinger” more than made up for that.