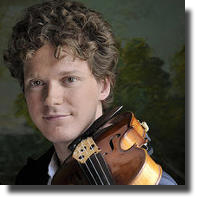 Vancouver born Corey Cerovsek returned to the Orpheum concert hall with his 300 year old Stradivarius this weekend for a series of three back-to-back concerts. When the young Cerovsek made his orchestral debut with the Calgary Philharmonic he was only nine years old. Now almost forty, he is no longer regarded as a Wunderkind, but has gone on to be a guest soloist with all the major Canadian orchestras and many others outside Canada – if anyone has lived up to their earlier potential – it is Corey Cerovsek.

Erich Wolfgang Korngold has never been one of my favourite composers, but I can see why Cerovsek would want to perform his 1945 violin concerto in front of his home crowd. Gleaned and assembled from a selection of his many film scores, the well-crafted romantic lyricism of three distinctly unique movements provide the perfect showcase for a virtuosic musician to promulgate his talents and Cerovsek’s interpretation was nothing short of sublime.

The first movement, moderato nobile is lively yet tender, while by comparison, the second movement romance: andante is more pastoral. The third movement finale: allegro assai vivace is by far the most evocative section; similar in character to Aaron Copland’s landmark Appalachian Spring with its folksy Americana melody lines. As a sensitive interpreter Mr. Cerovsek surely has the talent to make the audience hear music as a new experience.

I wonder how many other symphonies have been inspired by the composer’s infatuation with a particular female’s face and form as much as Hector Berlioz’s Symphonie Fantastique. Berlioz’s monumental work was, in its time considered to be truly ground-breaking, blending biographical elements with an idée fixe created from his own fertile imagination.

In the evening’s final selection, Maestro Milanov’s redolently dynamic reading runs the gambit through the symphony’s five movements from tranquil to bizarre and from an ambrosial opening passage to the delirium of the fifth movement: songe d’une nuit du sabbat (dream of a witches’ Sabbath).

The orchestra showed no signs of languor after the holiday season break. Vancouver concert-goers can certainly look forward to a banner year of great music in 2012.