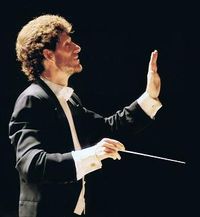 Paying homage to Verdi and Wagner for their birth bicentenary (1813-2013), The Yucatan Symphony Orchestra opened its season with favourite pieces from these two great composers. The first half of the programme opened with Verdi´s overtures of La Fuerza del Destino and La Vispera Siciliana, followed by La Traviata´s prelude to Act I. The waltzy tune of La Traviata was beautifully played by the strings group, while Wagner´s overture of Rienzi which ended the first part gave me the impression of the soundtrack of a Hitchcock movie, suspenseful, combined with drumbeats, sounding off victorious themes and marching rhythms which I´m certain pleased the romantic and stormy spirit of Hitler.

The second half of the programme started off with the overture of Verdi's Nabucco, which was deliverd quite exquisitely by the orchestra, and ended with three pieces from Wagner: preludes to Acts I and III of Lohengrin, where the popular ¨Wedding March¨ was taken from. And the last piece was the overture to The Flying Dutchman, a sensational, almost bombastic piece, unleashing stormy emotions which was characteristic of the Sturm und Drang romantic movement of the 19th century. Again, the Yucatan Symphony delivered with panache.

Maestro Lomónaco introduced these great composers, referring to Verdi as being the most popular, and in his opinion, the best composer of the 19th century. In an email interview, I asked if indeed Verdi was the better composer, and he replied: "En mi breve comentario antes del concierto que Verdi y Wagner fueron dos pilares de la Opera y que Verdi al morir era quizá el compositor más famoso en aquel tiempo. No me refería a que Verdi fuera el mejor. Creo sin embargo que en la lista de los compositores más importantes de la Opera estarían sin duda Wagner, Verdi, pero también muchos otros: Mozart, Donizzetti, Puccini, Strauss etc." ( " In my brief comments before the concert, I mentioned that Verdi and Wagner were two pillars of the Opera and that Verdi, when he died, was perhaps the most famous composer at that time. I didn't say that he was the best. I believe, however, these two were the most important composers of Opera, but there were also other like Mozart, Donizzetti, Puccini, Strauss, etc.")

Then he referred to Wagner´s impressionistic music as "heavy", especially his operas which last for as long as six hours. He said: "Las Operas de Wagner son obras largas, con gran orquestación (que le dan un carácter más pesado) y libretos escritos por el mismo." ("The operas of Wagner were long operas, with a lot of orchestration which tends to make it heavy, and he also wrote the librettos himself.")

I was quite impressed by this orchestra which had its first season at the José Peón Contreras Theatre in 2003. Out of the original 38 musicians, 12 are Mexican-born and 26 were foreigners. The orchestra now has 55 musicians, hailing from around the world, including the UK, USA, Italy, the Czech Republic, Cuba, Poland, Romania, Colombia, Bulgaria, Russia, Japan, France, New Zealand, Spain and of course, Mexico.