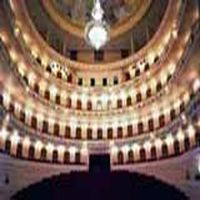 Another successful performance, and there was a prolonged ovation from a full-house matinee audience for solo violinist Christopher Collins and Maestro Lomónaco in last Sunday´s matinee concert! The theme of last weekend's programme was Hungarian and Russian music. The concert started off witha three-minute rendition of Brahms' Danza Húngara No. 1. Following this was Karl Goldmark's Concierto for violin No. 1 Op. 28 with Collins as soloist. This was indeed a challenge for Collins because this 50-minute violin concerto is techniclly difficult, as this Hungarian piece is influenced by the melody and rhythm of gypsy music. But the orchestra delivered with focused perfection, and Collins proved himself a virtuoso. Bravos followed after the execution of this lengthy piece.

After the intermission, the orchestra performed the 50-minute Tchaikovsky Symphony No. 5, Op. 64. I liked the second movement, the Allegro cantabile, which started off with a solo French horn, "dolce con mucho espresso", followed by the next movement, Vals: allegro moderato, and ending in "ritenuto molto", an inspiring finale with an andante maestoso, reminiscent of the 1812 Overture, which inspired the Russians to fight the French during the Napoleonic Wars.

Tchaikovsky wrote many works which are popular with the classical music public, including Romeo and Juliet, and his three ballets (The Nutcracker, Swan Lake, The Sleeping Beauty). His operas The Queen of Spades and Eugene Onegin, are among his most familiar works as well as Manfred Symphony, Francesca da Rimini, the Capriccio Italien and the Serenade for Strings.

The matinee audience is composed mostly of senior expats who fly down from Canada and the United States to escape the cold winters and enjoy the warm weather of Merida. Other than concerts, the Teatro includes in its season an opera. This year's opera will be Puccini's La Boheme which will have six performances in June, and a children's show, the Disney film Fantasia accompanied live by the Yucatan Symphony Orchestra, on April 26 and 28.

The Teatro Peon Conteras, presided by Adolfo Patrón Luján, is a beautiful theatre, a neoclassic structure constructed from 1900 to1908 under the direction of Italian architects. The theatre has four levels, the highest one,the fourth, meant to be standing room only, and there's a huge crystal chandelier hanging at the ceiling. This was obviously patterned after the great opera houses of Europe.