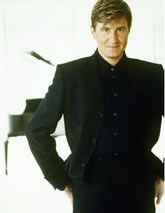 The opening of a new Vancouver Symphony season is always a festive event: there's the national anthem, a very full house, invited guests, a post-concert reception, and a buzz in the air. The summer's musical dearth has at last ended. Sure, there are the festivals, but there's nothing quite like music almost week after week as the VSO plays it. When Maestro Tovey lifts his baton to lead an orchestra that's one of the most active in the country you know all's well with the musical world for another season.

The choice of repertoire -- all "big" pieces with an emphasis on flash and schazam and massive orchestral forces -- was somewhat monochromatic, but celebrations have their own logic and if this was an omnium gatherum occasion for Vancouver's cultural movers and shakers, hoping for deftly-etched subtlety was the wrong spirit in which to attend it.

The adrenalin-rush opening of the overture to Wagner's opera The Flying Dutchman lacked nothing in power and intensity, Maestro Tovey driving orchestra and audience out, as it were, out of a long summer sleep. The seas crashed, sailors danced vigorously, true love triumphed after trials and vicissitude. There were a few rough edges and blare-y moments, but this was a convincing run through of a familiar score, with the string section playing with singular intensity.

Not widely regarded for his orchestral writings, Liszt was moved to write two piano concerti. Predictably they thrust the piano forward with bravado and confidence, leaving the orchestra to play a mainly supportive role. Strut-your-stuff music, the second concerto is heavy on power but low octane on musicality. Thibaudet, with hands on fire, acquitted himself effortlessly: hitting all the notes, and proving the strength of his steely fingers.

Composed in a single movement with variations in tempi, the piece makes few demands on colour, and though rapid-fire delivery is crowd-pleasing, the writing is flashy, with some exquisite lyrical moments emerging almost out of nowhere from the tumpy-tum background. Principal cellist Lee Duckles ran with the intensely beautiful music that falls to his lot -- and nearly stole the show. It seemed almost with relief that Thibaudet turned to the purely lyrical in his choice of encore, playing Chopin's Nocturne Op. 9 No. 2 in E Flat, although it displayed the tendency to dry correctness already evidenced in his technically effective but mechanical performance of the Liszt.

The evening's highpoint undoubtedly belonged to the orchestra, with Maestro Tovey coaxing out an exciting reading of Strauss's Ein Heldenleben, abetted by dazzling virtuoso playing by Concertmaster Mark Fewer as well as by the woodwind and brass sections, whose youngish members played their hearts out. Maestro Tovey controlled the massive forces with his characteristic deftness and commitment for an impassioned and stylish reading of this tone poem.

One of the evening's surprises was a much better-looking, more informative programme, whose "re-look" is as welcome as it is long overdue. Like the orchestra itself, it gives off a fresh, bright and confident look. Kudos to the publicity department.