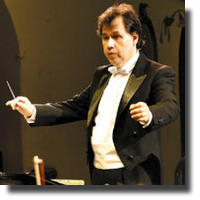 What a special treat - a complete concert of Latin music and to boot, with guest conductor, Maestro Jorge Mejia from Honduras! What a dynamo! A Canadian premiere of his own composition, Danza, Magia y Ritual! This symphony in four movements with no pauses in between, as in the case of most symphonies, was received with a rousing applause by the Shaugnessy church audience.

A chorus of four including vocal guests Elizabeth Lewis Celeste (Soprano), Megan Latham (Mezzo-soprano), Matt Chittick (Tenor) and Peter Alexander (Baritone) completed the rendition of this piece which was commissioned for the 1999 "Pride of Our Heritage" event. Originally, it was a cantata commissioned in 1992 in Berlin to commemmorate 500 years of the discovery of America.

The nice thing about the Shaughnessy Heights United Church is the intimacy of the surroundings. Even the members of the orchestra mixed with the audience, before the show and during intermission, perhaps friends and relations. A really homey kind of an atmosphere.

But this is indeed an excellent orchestra under the artistic direction of Jin Zhang and Assistant Conductor Jens Nissen who conducted the first piece in the programme, the 19th century Zarzuela Spanish composer Geronimo Gimenez's Las Bodas de Luis Alonzo. Nissen later joined the percussion section of the orchestra for the rest of the programme.

I was delightfully surprised by the Vancouver Philharmonic's excellent rendition of Astor Piazolla's Tangazo, a difficult symphony to render. Piazzolla gained his popularity for his tango compositions played mostly with the bandoneon, but this particular piece was made for full orchestra and conveys the composer's dark vision of the tango.

The other piece played exquisitely by the orchestra and enjoyed by the audience was Mexican composer Arturo Marquez's Danzon No. 2. I could see here the influence of the mariachi because his father was a mariachi musician and his grandfather, a folk musician. But this particular piece had a Cuban rhythm to it. Danzones are based on the music of Cuba, and one could feel the rumba and cha-cha beat to it.

This was an enjoyable evening and this community orchestra composed of amateur musicians is indeed Vancouver's hidden treasure!