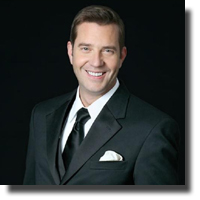 The Vancouver Symphony Orchestra
The Best of Lerner and Loewe!

What a great show! Oh, what great timeless music by the great Lerner and Loewe! This musical duo created some of the best-loved music for theatre. In this show, songs that were hits from the musicals Camelot, My Fair Lady, Brigadoon, Paint Your Wagon, and Gigi were beautifully rendered by Amy Wallis, Jonathan Estabrooks, David Curry and the UBC Opera Ensemble under the baton of the very charismatic Maestro Steven Reineke along with the VSO. These songs especially "Camelot", "If Ever I Would Leave You", "Gigi" and more made us humming their tunes for hours after the show.

This all-Canadian cast was terrific. Vancouverite Amy Wallis was magnificent in her rendition of "I Could Have Danced All Night" from My Fair Lady. David Curry who has a slight resemblance to Daniel Craig was funny and got the audience laughing, singing "I'll Go Home with Bonnie Jean" from Brigadoon. And the debonnaire Jonathan Estabrooks was wonderful in his "On the Street Where You Live" from My Fair Lady.

The UBC Opera Ensemble with almost 50 voices did a marvelous job with "Gigi" from the musical of the same title with the accompaniment of the award-winning VSO. Maestro Reineke was very informative as he narrated how these musicals were long-running in Broadway and won many awards, especially the Oscars when they were made into film.

During the intermission, one of the seniors in the audience told me, "I don't know why they don't play this kind of music in the radio. All we hear now is rap and music that's tasteless." Well, I hope radio stations will appreciate these classics and play them more often. Personally, this was music I grew up with in the 50s and 60s, and they'll never lose their touch.