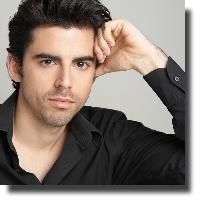 Although Tyzik and DeSare are the stars of this show, the instrmentalist who stood out in this performance was Dale Barltrop, VSO's Concertmaster, from Brisbane, Australia. Tyzik himself complemented him for doing the best violin rendition of "Autumn in New York", Tyzik's arrangement of Duke's classic song popularized by many singers including Frank Sinatra. DeSare also congratulated him for his violin rendition of this song.

Tony DeSare is a charismatic young man like Canadian crooner Michael Buble, following in the footsteps of the great crooners. They are disciples of the original crooners Sinatra, Martin, Bennett and Como. In fact, the name DeSare sounds Italian, and he looks Italian and can pass for a grandson of one of these legendary Italian-American crooners.

The generation of ol' timers today have actually experienced going to concerts of these original crooners, and these disciples and/or imitators like DeSare and Buble who have followed don't quite meet the standards of the originals. But that's logical. A clone is really different from the original, in that the same feelings emoted by the original singers like Sinatra are inimitable. Perhaps, for entertainment, it's not too bad, but for originality--I see no comparison. Buble and DeSare try to imitate their style, but you can always trace some kind of phoniness when you hear them. For example, the classic "My Funny Valentine" was poorly sung by DeSare. I even noticed traces of off-tunes in the melody when he sang it last opening night.

The same thing goes for Buble when he tries to ape the swagger of Sinatra--no comparison whatsoever.

However, it's good that these "impersonators" or more euphemistically put, "tribute artists", are around to enlighten and educate the young audience of today about the songs that originate in the golden age of music of the 1940s, 50s and the 60s.

With regard to Tyzik, he is admirable a classic, an original, not only as a conductor but as trumpet player. Whenever he comes to Vancouver to conduct, he almost always does a brief trumpet rendition. And he is well-liked here.

All in all, I think the opening night performance delighted and entertained a half-house audience composed of seniors, mostly VSO subscribers, who were all too familiar with those classic ol' fashioned songs--"Satin Doll", "That Old Black Magic", "Night and Day", "Two for the Road". and others.