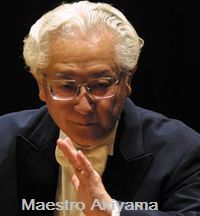 What remains in one's mind as he/she leaves the Orpheum is the haunting tune of the first text, O Fortuna which again is repeated in the end of this powerful symphony of German composer Carl Orff.. A standing ovation and the usual bravos followed afterwards, on opening night of this choral tour de force of the combined voices of more than 150 members of the Tokyo Academy Chorus and the Vancouver Bach Choir. Naturally, the VSO delivered magnificently under the baton of Maestro Akiyama.

Drinking, gambling, gluttony, lust, the fleeting nature of fortune and wealth, the joy of Springtime, love – and, of course, a talking swan roasting on an open fire – Carmina Burana has it all. Carl Orff set to music twenty-four texts from the medieval manuscript of courtly poetry and dramatic texts collectively known as Carmina Burana, Orff’s work has become one of the most popular choral pieces ever written.

There was a first part to this show, which served as an appetizer to the second half of the programme: two Russian composers, Rimsky-Korsakov's Russian Easter Overture, Op. 36 and Borodin's Prince Igor: Polovtsian Dances. The latter became a popular Broadway hit song, "Stranger in Paradise" from the 1953 musical Kismet.

I don't think it was necessary to include the first part of the programme because Orff's symphony is over an hour long. Actually, if arranged properly, it could last for an hour and a half. The in-between texts can be repeated and dramatized, as did James Westman and Tracy Dahl as they flirted with each other on stage. Westman got a few laughs for his comic antics as he sang with his excellent baritone voice.

With the accolades and extended bravos, we were out of there at almost 10.30 at night, which is a bit too long for a concert. If only the Carmina piece was done by itself, we could have been out of there by 9:30.