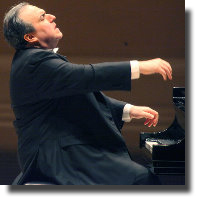 Bravos and a standing ovation greeted one of the world’s greatest pianists, Yefim Bronfman, after performing Beethoven’s Piano Concerto No. 3 in C minor last October 18th. He was so overwhelmed by the reception that he gave for his encore number a solo piano piece without the VSO accompanying him.

But what kept on going through my mind after the show was the haunting tune of the third movement of Brahms’ Symphony No. 3 in F Major, Op. 90. I couldn't remember where I heard this, and I had to google until I finally found it. The tune was the sound track of an old film, Goodbye Again, starring Ingrid Bergman, based on the novel Aimez-vous Brahms? by Françoise Sagan, first published in 1959. This piece was played in the first part of the programme together with Mozart’sThe Magic Flute, K.620: Overture, which started off the evening.

Vancouverites can be proud of their VSO, a 2008 Grammy Awardee, because this orchestra is a truly fantastic orchestra. But if it weren't for the charismatic Maestro Bramwell Tovey at its helm, it wouldn't have gotten this far.

Kudos again to guest pianist Yefim Bronfman for his excellent rendition of Beethoven and to our magnificent VSO. Wishing the orchestra members their continued success in the days ahead.